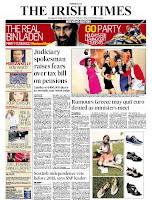 Professor Morgan Kelly of UCD has published an article in the Irish Times of 7 May which, like his previous interventions, has sparked a lively debate about Irish economic policy. He has a lot of credibility because he foresaw the bursting of the Irish housing bubble before the bust happened.
Now, he is advocating a two pronged strategy

1)    That Ireland  walk away from the  EU/IMF deal (a notion that is, of course, attracting a lot of favourable media  comment)


2)   That , in order to be able  to pay its way in the absence of funds from the EU/IMF , Ireland should immediately  eliminate its  budget deficit ( a  drastic notion that, equally predictably,  is being ignored in the  same media comment). While I favour speeding up the adjustment, doing it all in one year would be impossibly disruptive.
He claims that a strategy along these lines is needed because otherwise he thinks our debts are unsustainable. He bases this on pessimistic growth assumptions, which may or may not transpire. And he argues that a slow  messy bankruptcy would destroy an Irish  economy that depends so much on international trust. Better, he argues, to do the whole job immediately.
There are a number of elements missing in Professor Kelly’s analysis.
He does not consider the impact of what he is doing on other countries, and how they might react.
If Ireland were to walk away from the EU/IMF deal, that will leave the European Central Bank itself with a huge shortfall. In fact the ECB would be broke. It would have to go to the member states to look for more capital. Emulating Irelands example,  they would probably refuse,  and then the euro itself would collapse.
Ireland would then have to launch a new currency of its  own in the same  year that it  was having to  cut wages by 40% and increase tax revenues to meet Professor Kelly’s other requirement of balancing  its budget in one year.
Ireland would also presumably, because it would be reneging on freely contracted debts to an EU institution and to other EU members, find itself excluded from the benefits of EU membership. For Ireland, the Common Agricultural Policy would disappear overnight, as might our access to EU markets for other products.
Professor Kelly, who is an economic historian, should look up what happened when we last walked away from international financial obligations. We refused to pay land annuities over to the UK in the 1930s, and found some of our critical exports excluded from the UK market, with devastating effects in what came to be remembered as the “Economic War”.
That is not to say that the EU should not be challenged. The EU/IMF programme may indeed be too optimistic. There is a lack of joined up thinking on economic policy in the EU.  The EU institutions may be too nervous about burden sharing by private bondholders. There is a selfish nationalism  about  some of the stands being taken by our EU  partners.   But then there is a selfish nationalism about some of our own attitudes too. We all have domestic political constituencies and media to appease
Ireland may not be as influential as would like to be in the EU. But at least we are still in the EU, and we have some influence still.  We can use that influence to move the EU towards a more credible long term strategy  that allows  countries like Ireland time to  restore their  finances, and allows surplus countries like Germany time to   rebalance their economies  towards consumption.
But trying to that overnight, by holding a gun to everyone else’s head as well as to our own as the Professor urges, seems to me to be needlessly reckless. Professor Kelly argues that we need to do something like this to keep our international credibility. I am afraid the course he advocates would  destroy our international credibility instantly.
Al banking, all money, is based on mutual confidence.
Why else do we accept a scrap of paper, with no inherent value itself, as worth 100 euros or 500 euros or whatever other number is written on it?
Why else to we hand over our saving to banks on the promise that the money will be there when we need it?
It is all about trust. Without trust, the entire modern economy, built up over three centuries, would disappear…..overnight.
Breaking trust with our European and international neighbours would undermine the future of our own economy, and the economy of those to whom we sell,  and  that is why I  do not think Professor  Kelly’s article  offers  good advice at all.
Print Entry