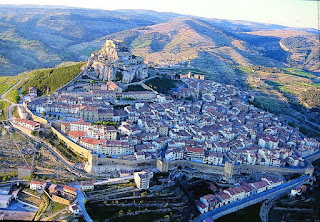 My wife, Finola and I have just spent an enjoyable few days in part on the Valencia region on the east  coast of Spain.

One of the highlights of our visit was the spectacular walled mountaintop city of Morella, which is about 70 km from the coast. It is one of the oldest recorded settlements in Spain, was occupied by the Berbers in  714, but reconquered by King Alfonso in 1117. Its walls are well preserved and are more than 2km long and were besieged many times, most recently in the Carlist civil wars of the 19thcentury. The castle is magnificent and intimidating, but unfortunately, as seems to be a pattern in this part of Spain, the famous basilica was closed both to visitors and to would be worshippers.
We were staying close to Peniscola. This fortified town is on a peninsula jutting out into the sea. It was occupied at different times by the Carthaginians, the Romans, the Moors and the Knights Templar. During the time of disputes about the Papacy, one of the claimants, Benedict XIII lived in Peniscola from 1417 to 1423.
Print Entry