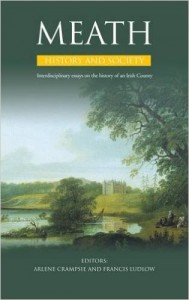 It is a privilege to have been invited to speak at the launch of this enormously important publication about the history of Meath.

Meath people have a deep interest in their heritage. As is pointed out in the book, of 1000 or so voluntary societies active, some 500 are related to its heritage.

I am very pleased that the book starts with a major chapter on the Hill of Tara, recalling its symbolic importance as a unifying symbol for Ireland. Meath people tended to gather in Tara on important occasions, such as during the 1798 rebellion, the monster Repeal meeting there in 1843, and the major parade of John Redmond’s National Volunteers in 1915, at which my grand uncle John led the Dunboyne contingent.

The chapter by Eoin O’Flynn on the High King Mael Sechniall gives a valuable insight into an important, but neglected, historical figure.  Meath had its own Brian Boru.

The chapter ASK Abraham on the major landholders of the 15th century in county Meath is fascinating. It is interesting to note that some of the families he mentions survive to this day on their original holdings, but others have disappeared.  It would be interesting to study the reasons why some families survived, in prominent positions, while others did not.

This chapter also explores how the castles of these families served as a means of demonstrating their local political influence, as well as providing a residence for family members.

Meath, although on the border of the Pale, seems to have been a much more peaceful place in the 15th century than one might have thought.

Brendan Scott’s chapter on the failure of the Reformation in Meath in the 16th century deals with a subject that remains at the heart of Irish political history to this day.

Although Meath was under strong control of the Royal authorities in Dublin, and was dominated by Old English families, efforts to replace Catholic by Protestant belief failed, in contrast to experience in Britain where Royal control was not that much less than it was within the Irish  Pale. Why?

It seems that there were divisions of approach between the Archbishop of Dublin and the Bishop of Meath, both of whom were promoting the Reformation for the King, but could not get on with one another, and these divisions contributed to the failure of their efforts.

Another explanation may be that the church reforms, which were initiated in England by parliamentary legislation, were introduced in Ireland by Royal Decree. This lack of local involvement probably sealed the failure of the effort.

But this subject would reward further study.

Again, the chapter by Annaligh Margey, on the Wars of 1641-1654, brings out similarly fascinating questions.

The nationwide making of common cause between the old English gentry in Ireland, who had remained Catholic, and the Gaelic Irish gentry who were also Catholic, took place at open air conferences at Crufty and Tara in Meath.

The attacks that took place, when the rebellion was initiated in 1641, on the Loyalist community in Meath are explored considerable detail.

The author draws victim statements given afterwards, about their sufferings, by what the author describes as “British settlers” in the county

Looking through the names of some of those made depositions; I have to say many may have been descendents of people who would not appear to be “British Settlers”, but rather natives who had conformed to the Established Church.

For example, surnames  like Grace, Dowdall, Barnewall, O’Loughlan, Prendergast, Nangle, O’Gowen, o’Fanegane and Molloy, which appear among the deponents, seems like surnames of people whose ancestors  had been in Ireland for a long time. So perhaps Meath society in the 16th century was even more mixed than one might have thought.

The dramatic story of Elyn Ni Kelwey of Castlejordan, executed in 1647 for killing the infant child she had by a married man,Tirlogh O Doran, is one that could be taken up by a playwright with a sense of 17th century history.

I really enjoyed Padraig Lenihan’s chapter on the battle of the Boyne. He brings out the fact that the French were advising King James not to fight at the Boyne at all, to burn Dublin, and retreat behind the Shannon. It is to his credit, that James did not take this advice.

At the outset of the battle, William was very nearly killed, and it that had happened, the course of history might have been very different.

King William’s plan was to encircle and destroy James’ much smaller army by crossing upriver. In this William failed because James countered effectively,  and, while it was defeated, James’ army was able to retreat in relatively good order, and was not trapped by the Nanny river in Duleek, as it might have been.

But James’  retreating Army seems to have failed to make its appointed rendezvous in Dunboyne, and dispersed after that. It was a defeat, but not a terminal disaster, as it might have been.

Kevin Mulligan’s chapter on the big houses of the 18th century, shows that many of the families, who were on the losing side of the Battle of the Boyne, still were significant Meath land owners 100 years later, and some of them had not been required to change their religious belief.

Ruan O’Donnell’s chapter, on the lead up to the 1798 rebellion, describes a society in Meath that was in deep internal conflict over land, power and religion. Crime was rampant.

On the one hand, the Catholic Church, which had recently won the right to establish a National Seminary in Maynooth, wanted to adhere to a path of peaceful negotiation with the authorities. It was supported by many Catholics in this stance

On the other hand, the United Irishmen and the Defenders, inspired by the French Revolution, wanted to prepare for, and support, a French invasion of Ireland.

Given the way in which the French revolution had treated the Catholic Church in France, only a few years before, it is surprising that there was so much support for Revolutionary France in Meath, including among some Catholic priests. It would be interested more about why this was so, and how Catholic priests in Meath thought about the treatment of rebel Catholics in the Vendee by the French Revolutionary authorities.

There seems to have  been a lot of organised violence in Meath long before the 1798 rebellion, notably a major conflict between the Defenders and the militia at Coolnahinch in 1793.

It is interesting to discover that  Free Masons seem to have been involved in both the United Irishmen and the Orange Order.

There is a chapter on the War of independence by Ultan Courtney.

There is no entry on the effect of the Parnell split in Meath, where the county played a national central role. Meath’s role in the Home Rule agitation from 1900 to 1914 might also be covered in a future book, as well as the sufferings of the county during the influenza of 1919 and the Farm Workers Strike of the same year. The 1919 flu killed more people globally than the First World War.

I am delighted to note, and look forward to reading, chapters in the book dealing with

the activities of the Land Commission,

the Famine(from which some parts of Meath suffered gravely),

the Human impact of the landscape of the County, and on

Literature and Learning in Mediaeval Meath

The Naper family estate in Oldcastle

as well as many more contemporary topics.

I commend Geography Publications, and Meath County Council, and all the authors, for a tremendous piece of work.  Well done, and Thanks!

Speech by John Bruton, former Taoiseach and Deputy for Meath from 1969 to 2004, at the launch of Meath History and Society, Interdisciplinary essays on the history of an Irish county (Dr Francis Ludlow and Dr Arlene Crampsie, editors) On Wednesday, 2 March 2016, at 7pm in Meath County Library, Railway Street , Navan