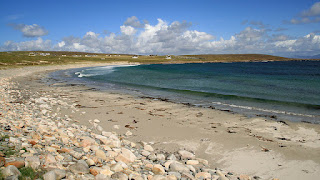 Finola and I spent a few days in her native county of Mayo recently.
We visited the beautiful, and almost deserted, beaches of the Erris peninsula, which is  one of the most remote places in Ireland . We were there on one of the few sunny days of what has been a disappointing Irish summer.  We enjoyed a lobster in the newly opened Talbots Hotel in Belmullet.

We also were in Westport for the Westport Music Festival, and were at a free concert of the Sawdoctors, whose music captures something of the essence on the  west of Ireland, and its people .