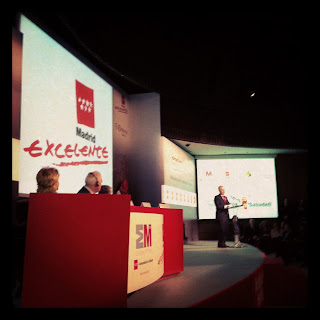 I was in Madrid last week to address a meeting organised on behalf of the Community of Madrid.
The government of the Madrid region  is headed by one of the leading figures in Spanish politics, Esperanza Aguirre. The theme of the conference was Innovation.
Also speaking was Alvaro Uribe, the clear sighted and brave former President of Colombia,  who defeated the  terrorist threat to his country and gave it the  opportunity to grow again.
THE PRECONDITIONS FOR ECONOMIC GROWTH
Both former President Uribe and I spoke about the preconditions for economic growth which include
+ order and security
+ the rule of law
+ easy procedures for setting up a new business
+ labour market rules that do not make it  unduly  risky for an employer to add to his workforce in tough times in the hope of getting new business
+ an educational system that encourages engagement with other countries, and competence in  mathematics and science
I said  that “innovation” is, first and foremost, a state of mind.
Even if one invests heavily in technology, but does not have a constant willingness to try to new ways of doing things, one will not innovate and  succeed economically.
The planned economies failed, not because they did not invest enough, but because their bureaucratic procedures failed to encourage an innovative state of mind.
YOUTH UNEMPLOYMENT
Like Ireland, Spain faces a huge unemployment problem. The youth unemployment level in Spain is  48%. This is higher than Greece, where the rate is 47%. In Estonia the rate is 32%, in Portugal 30%, and in Ireland it is 28%.
In Austria and the Netherlands, youth unemployment is only 8%, and in Germany it is 9%.
This  explains why the latter group of countries have a totally different attitude to the European economic crisis.
MALE UNEMPLOYMENT………AN  ESPECIALLY IRISH PROBLEM
In Ireland’s case, unemployment is twice as high among males as among females.  This is so nowhere else in Europe, and is a phenomenon that is being totally ignored.
This disproportionate level of male unemployment, is at least as important a topic  in gender discrimination as the proportion of women on boards of directors.
DISMANTLING FRANCO’ S LEGACY….MAKING IT LESS RISKY TO EMPLOY MORE PEOPLE
In Spain, as in Ireland, efforts are being made by the new Government of Mariano Rajoy, to open up the labour market to young people.
Spanish Employers are reluctant to take on extra employees, in the hope of winning extra business, because existing Spanish law tells them they must keep the extra employees on,  whether they retain the extra business or not.
Spain has a very rigid and heavily regulated labour market. Wage rates are set centrally, and must be paid regardless of the condition of the firm. The cost of making a person redundant is very high too. These rules were made in the  1940s, in accordance with corporatist thinking,  by General Franco, and were not changed when Spain became a democracy.
Ironically, the big defenders today of Franco’s legacy in labour law today are left wing  trade unions. Similarly rigid wage setting mechanisms, that discourage the creation of new jobs in tough times, exist in a limited number of trades in Ireland too, and in other European countries but nowhere is the system as rigid as that in Spain.
Print Entry

GERMANY BASHING IS BESIDE THE POINT……….. IT IS TIME TO FACE THE REAL CHOICES