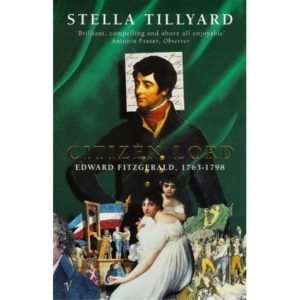 Lord Edward Fitzgerald was one of the leaders of the 1798 Rebellion in Ireland. He was arrested and fatally wounded before the rebellion got fully underway, but he had done much of the ground work and planning for it.

Early in his life he became alienated from his father, the Duke of Leinster.

He was very close to his mother, who ensured that he, and his siblings, were educated in accordance with the principles of Rousseau. Much of the material in the book comes from letters he wrote to his mother. Later, he was inspired in a revolutionary direction  by the ideas of Thomas Paine, author of the “Rights of Man”.

For someone who was dead by the age of 35, Lord Edward led a very varied life.

A younger son of the Duke of Leinster, he joined the Army as many younger sons of aristocratic families had to do. He had some land at Kilrush Co Kildare but not enough to support an aristocratic life style.

He fought on the British side in the American War of Independence and this meant that he was one of the few 1798 leaders who actually had some prior military experience.

He was wounded at the battle of Eutaw Creek in South Carolina in 1781, one of the last battles of the war, and his life was saved by a young African American, who subsequently became his employee and friend, who eventually accompanied him back to Ireland. The two of them subsequently trekked across North America from Nova Scotia to New Orleans.

Like many on the Whig or Liberal side of UK politics, he initially supported the French Revolution. Most of these initial supporters moved away from it as a result of the execution of the King, the Reign of Terror, and French military advances into neighbouring countries. Not Edward Fitzgerald.

He even went to Paris in 1792 to observe the Revolution, and it was there that he had his first conversations with Henry Sheares about the possibility of bringing the Revolution to Ireland.

Although this is an excellent book, it does not fully explain the progression of thought which led a leading aristocrat, like Edward Fitzgerald, to become a violent revolutionary. Clearly, for him, the power of ideas over rode economic and class interests.

Another aspect of the 1798 Rebellion, not within the scope of this book, is why so many Catholic priests became involved in a Rebellion in Ireland in 1798, in support of the French Revolution, notwithstanding the fact that French Revolutionaries had suppressed Catholic religious practice and, in 1796, put down a pro Catholic Rebellion in the Vendee with exceptional brutality.

Tillyard’s book is exceptionally readable and illuminates the subject’s personal, as well as his political, life. I recommend it.

COMPETITION IN THE WESTERN PACIFIC…..A THREAT TO WORLD PEACE?