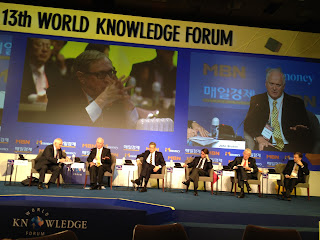 I was invited to speak this week at the World Knowledge Forum in Seoul
I shared a platform with  four other former European Prime Ministers or Heads of State, Wim Kok of the Netherlands, Jose Maria Aznar of Spain, Christian Wulff of Germany and Esko Aho of Finland.
We discussed  how the problems of the euro can be resolved, a topic of  passionate interest to Koreans, who rely heavily on  Europe as a market for their exports.
Jose Maria Aznar said that the future of the EU and the future of the euro are interlinked. If the euro failed, so too would the EU itself. He is right. If the euro broke up there would be trade wars and competitive devaluations within the EU, which would destroy 60 years work.
I argued that five things were needed for the euro to survive , and confidence to be restored
a substantial further write off of Greece’s debt
an effective firewall against contagion
a new robust system to govern economic policy in the eurozone
a downsizing and recapitalization of  Europe’s banking system,  within a banking union with mutual deposit guarantees
policies to increase growth through targeted investment
I said I believed we were making substantial progress on the first four, but none yet on growth.
The Forum heard from many distinguished economists, who also offered their prescriptions for the euro.
Paul Krugman said the ECB should act as a lender of last resort, and explicitly say that it would accept a higher inflation rate. It is interesting to note that inflation has been lower in Germany under  the ECB and the euro, that it  was when the Bundesbank was in charge of the deutschmark  prior to the launch of the euro. I think he is right on this point.
Nouriel Roubini said the euro should be devalued to parity with the dollar.  This would give countries like Greece, Italy and Spain a chance to regain lost competitiveness. It is worth noting that when the euro was first launched it had a lower value than the dollar. While structural reforms and austerity could eventually deliver a similar improvement in competitiveness, he felt it would take far too long. I would argue that the experience of Latvia, Estonia and Lithuania would suggest the contrary. They cut dramatically, without devaluing, and have returned to rapid growth.
Martin Wolf said that the problem in both the EU and the US was that monetary easing by the central banks was not leading to more credit being issued. The money was out there, but it was not being passed around, because of a loss of confidence. He is right. The EU needs to act quickly to give people the confidence to start lending to one another again, even if  some loose ends remained. But that is difficult when every country has a different agenda, and there is no common European public opinion, and no venue, like an EU Presidential election, in which to create one.
Dominique Strauss Kahn said that there was a good agenda agreed of the things that needed to be done. The problem was the ability of the 27 Governments of the EU, and of the EU institutions, to do the these things quickly enough.
He said the crisis had brought windfall gains, in the form of artificially low borrowing costs, to some counties, and that these countries should pass these gains over to countries that were having to pay artificially high rates.   He explained that the crisis of confidence had meant that  that there had been a flight of money into safe assets like German Government bonds. This meant that Germany and a few other “safe” countries were borrowing at unnecessarily low rates of interest. He suggested that this windfall gain should be transferred as an interest subsidy to other euro zone countries that were borrowing at unduly high rates of interest.
He felt that this would be politically easier to bring about than would any mutualisation of debts already incurred or Eurobonds, because  it could be withdrawn if circumstances changed.
Print Entry

A POSSIBLE KINGDOM OF SCOTLAND, A REPUBLIC OF FLANDERS, AND A REPUBLIC OF CATALONIA— WHAT CHANCE WOULD THEY HAVE OF STAYING IN THE EUROPEAN UNION?