Article on The Irish Times 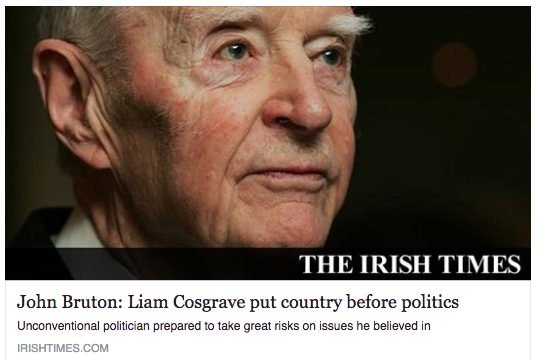 His election slogan in the 1973 general election campaign sums up what Liam Cosgrave’s political career was about.

It was: “Cosgrave puts the nation first”.

Before ever he became taoiseach, he had lived up to that claim . . . twice.

In 1970, he obtained information that some ministers in the government led by Jack Lynch had been involved in the illegal importation of arms into the State with a view to their supply for use in Northern Ireland, and that public funds were involved.

It was sensational information, with which he could have gone public to his own advantage, as leader of the opposition and would-be taoiseach. He could have brought the matter to the floor of the Dáil, precipitating a full-blown political and constitutional crisis, and possibly a general election.

He did not take that course. He realised that the institutions of the State are inherently fragile. This was especially so in 1970, when nationalistic passions and political violence were on the increase. Cosgrave wanted this dangerous situation to be dealt with in the most orderly possible fashion, by a government in place.

So he decided privately to notify Lynch of what he had learned, and allow him some space to take action, which he did.

It is impossible to know exactly what might have happened if Cosgrave had never brought this information to Lynch’s attention, but it is certain that the interests of the State would have been put at grave risk.

The second occasion on which Cosgrave put his country’s interests before his own was even starker. This was when, in 1972, he was determined to support the Offences Against the State legislation, promoted by the Fianna Fail government, but opposed by a majority of Fine Gael TDs. 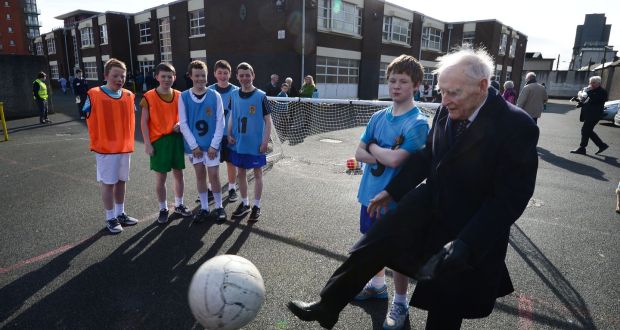 The Fine Gael deputies preferred the approach of the party’s justice spokesman, Pat Cooney, who argued that the legislation involved too great an incursion into basic civil liberties. Cosgrave was on the brink of being ejected as party leader on this issue when public sentiment was altered by a bombing in Dublin which highlighted the risk of subversion. Fine Gael rowed in behind its leader and his position was vindicated.

Cosgrave was not a conventional, consensus-hugging politician. As in the case of the Offences Against the State Act, he was prepared to take great risks on issues on which he held strong beliefs.

He also stood out against his own party in the matter of the electoral system. He did not like proportional representation, believing it led to weak government.

He may have come to this view because of his experience as chief whip of the interparty government of 1948 to 1951, which consisted of five parties and several Independents.

While open to criticism, his decision, in a free vote, to vote against the contraception legislation introduced by his own government showed he was willing to step outside convention on matters on which he held a firm position.

Yet he was a very effective chairman of government.

He was meticulous in ensuring that the commitments given to the LabourParty to induce it to form the coalition with Fine Gael were honoured. He had a good relationship with Labour leader Brendan Corish, forged during their long prior years together as parliamentary colleagues, and their shared interests, particularly in horse racing.

He was a deeply religious man, attending Mass every day, and he believed this life was a rehearsal for something greater.

His stances in 1970 and 1972 showed that had a strong sense of the integrity of the State and its democratically controlled institutions, such as the Army and the Garda. He had no time for paramilitarism of any kind. The State alone had the right to use force. He understood that chaos would arise if that was brought into question. This probably derived from the experience in 1922 of his father, WT Cosgrave, when, before the Free State was properly established, order broke down completely in many parts of the country.

As Fine Gael leader, Cosgrave was tolerant of free speech, dissent and debate within the party, to a degree that would be surprising to modern eyes, which expect political parties to present a smooth veneer of unity at all public party events.

I remember being involved, as secretary of the Fine Gael youth group in the 1967- 1968 period, in tabling publicly controversial motions, with others, seeking to change the name of the party and promoting slates of candidates to oppose outgoing officers supported by the leadership, and then having these matters openly debated and voted upon at the party ardfheis. No attempt was made by Cosgrave or the leadership to close down such debates, presumably because he felt strong enough not to have to do so – very different from the careful message management prevalent today in all parties.

Cosgrave’s undemonstrative, matter- of-fact style of leadership was one I sometimes sought, as best I could, to emulate.

But it was the private aspects of his party leadership that I admired most of all. He was exceptionally kind to less experienced colleagues and understood the human vulnerability that is part of political life. I can testify to this from one personal example

In 1976 I had had a particularly torrid day at parliamentary questions, when I was standing in, in succession, for two senior ministers, Dick Burke and Justin Keating, who were away .

My performance was roasted in the following morning’s newspaper by John Healy, then parliamentary correspondent of The Irish Times. I was sitting disconsolately in my office reading this bad review when I was told the taoiseach was on the line. My immediate thought was that he was going to tell me he had found someone who could do my job better that I could. I was wrong. Cosgrave had seen the paper, knew exactly how I would be feeling, and phoned be just to tell me not to worry about “all that stuff” and keep on with my work. I have never forgotten that kindness.

Something else is lodged in my mind. It is the pride and togetherness he was able to engender among his followers when he rose to address a party meeting. He gave voice to their thoughts and made them proud to be part of Fine Gael. There was a timeless quality to his oratory. It was almost as if one was listening to history. He was his father’s son, and his father had founded this democratic state. There was a deep continuity.

But there was nothing predictable about his oratory. He could be biting and funny in the same sentence. He was indiscreet and sharp sometimes, but, fundamentally, you knew where you stood with Liam Cosgrave.

For me, and those like me who came into political life under his leadership, there is a deep sense of loss today.

For Mary, Liam T and Ciaran, the loss is all the more intense. To them, to his grandchildren, and to all the extended Cosgrave and Osborne families, I extend heartfelt sympathy.