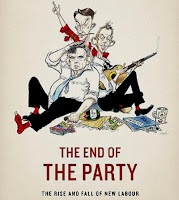 I have recently finished reading two books on the Labour Government in Britain, which held office from 1997 to 2010.
They are both by the same author, Andrew Rawnsley.
The first is “Servants of the People, the inside story of New Labour” and covers the first term of Tony Blair.
The second is “The End of the Party, the rise and fall of New Labour” and covers Tony Blair’s second and third terms, and the premiership of Gordon Brown.

New Labour held office during a period of strong economic growth, with plenty of resources available to facilitate reform.  They were remarkably good at winning elections, better than Labour had ever been before. But what has Britain to show for these 13 years?
Their achievements include the completion of the peace process in Northern Ireland, the establishment of devolved Governments in Scotland and Wales,  and an increase  the comparative   incomes of the  least well off 20 per cent of people in British society.
It is difficult to identify much else that stands out.
On the debit side, the proportion of national income absorbed by Government services rose from below 40% to almost 48%, with little evidence of increased consumer satisfaction with the performance of either of the two big services Government provides, health or education .
Tony Blair wanted to introduce more far reaching reforms to the health and education services, but was frustrated by his Chancellor, Gordon Brown. As Rawnsley puts it,
“Gordon was not necessarily against reform. He was against any reform proposed by Tony. It was all a question of authorship”.
Gordon Brown controlled the domestic agenda from the Treasury, expanding the power of that Department far beyond taxation and normal public expenditure control. And Tony Blair acquiesced in this, in a way that weakened the position of the Cabinet as a whole.
Labour added 3600 new criminal offences to the statute book and brought the British prison population to new highs. Interestingly, it is a Tory Minister, Ken Clarke who is now looking for ways to reduce the prison population.
New Labour engaged Britain in two new wars, in Iraq and Afghanistan, the first on what proved to be false pretences, and the second without having learned anything from history.
Tony Blair is portrayed in these two books was well intentioned, vacillating, and short termist on domestic policy. But, on the issue of Iraq, he was passionate, coldly determined, and almost messianic. Importantly, when Blair was at risk of being toppled because of Iraq, Gordon Brown rallied to his cause and helped him win over MPs, whose votes were critical.
Tony Blair wanted to bring Britain into the euro, but in order to be sure to win the 1997 election promised to have a referendum on it. A referendum on a currency matter is a dubious idea.
Gordon Brown then invented five, supposedly scientific, “tests”,  that would have to be passed to determine when, or whether, Britain might actually join the euro. These tests were, in reality, not scientific at all, but subjective and political, but, because the analysis was to be done in the Treasury, they served to give Gordon Brown a veto on the topic.
It is hard to understand how Tony Blair, as Prime Minister, allowed Gordon Brown to overrule him on an issue which was so important to him personally. As a result of Tony Blair’s failure to lead his own Government on this question, Britain is now further away from the rest of the EU, than at any time since the 1950’s, and may indeed leave the EU.
Rawnsley claims that, on domestic policy, while Blair  had  many ideas, and favoured new ways of doing things, he  “lacked sustained interest in the mechanics of delivery” and was “almost wholly uninterested in civil service structures”, which Ministers need to understand if they are to translate policies into results.
Ministers did not stay long enough in any job to master it. The average term of a Minister was just 18 months. The Conservative/Liberal Democrat coalition, perhaps because it is a coalition, seems to be avoiding that mistake.
These two books are very long, one is 508 pages and the other 761 pages, but they are worth the time.
They show how different Government is from Opposition.
In Opposition, a party need to roll out new initiatives every few weeks to ensure it is not forgotten.
In Government, it needs to stick to a few priorities, and relentlessly hound the civil service machine to ensure that these priorities are  translated into results on the ground as quickly as possible.
Print Entry

POLITICAL UNION IN EUROPE—-is it the binding cement that is needed, if countries are to be willing to take responsibility for other countries’ debts?