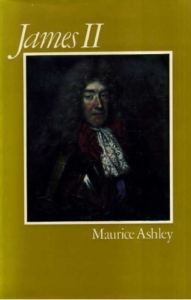 I have just finished reading a book that I bought many years ago, “James the Second” by Maurice Ashley (published by JM Dent)

James is remembered in Ireland as the King who supposedly displayed a lack of courage and thereby lost the fateful battle of the Boyne in 1690.

In England he is seen as the King who had to be overthrown in 1688 to preserve his subjects “religion and liberties”, as the banner of his opponent King William claimed.

Neither view is fair or accurate.

James became a Catholic as a young man, as did his brother King Charles the Second. But, whereas Charles kept this a secret until he was on his death bed, James was open about it.

Charles tried half heartedly, and without success, to remove the disabilities suffered in England by Catholics and by Protestants who did not belong to the Church of England. Oliver Plunkett was put to death during the reign of Charles the Second in 1681.

James, on the other hand sought to make toleration and freedom of religious worship the central goal of his reign when he succeeded Charles in February 1685.

He  also made it clear that he wanted this to happen while preserving the position, as the State Church, of the Church of England. Ashley, who has studied all the documents, including those from before James became King, is adamant that this was the case. He was for all round religious toleration.

As to his prowess as a soldier, Ashley shows that, in his earlier career, James had been a brave and resourceful military commander

Against advice from his French military advisors to retreat across the Shannon when William arrived with his army in Ireland in 1690, James, although outgunned and outnumbered 3 to 2, decided to make a stand at the Boyne.

He rightly understood that his volunteer army would melt away if he was not willing to put up a fight.

James is criticised for leaving his army after the battle and going back to France rather than staying on to fight in Ireland. His departure is partially explained by the fact that he was hoping to get French help for an invasion of England, and by the fact that his enemies controlled the sea lanes and he could not easily be resupplied, if he retreated and reassembled his army west of the Shannon.

This book does not, however, absolve him of criticism.

He was extremely tactless in his handling of the Church of England Bishops. His attempts to introduce sweeping religious toleration, by use of royal prerogative without parliamentary approval, showed that he had learned nothing from recent history and from the fate of his father, Charles the First.

He was overthrown in 1688 because he was deserted by his closest Lieutenants, and by his two daughters, both of whom were in turn to replace him on the throne. Perhaps the most justifiable criticism of him is that he did stand and fight against William in England in 1688, where he might have been able to rally support in much of middle England against the Dutch invader. Then he might never have had to take a stand at the Boyne.

Although he was a strongly religious man, he was also a serial philandered who had a succession of mistresses.

This book brings to light the flawed humanity of this sincere, but tactless and unlucky, man.

IS THE EUROZONE READY FOR THE NEXT CRISIS?

WHAT ARE THE HISTORIC ROOTS OF BRITAIN’S CONTINUING ANGST ABOUT EUROPE?