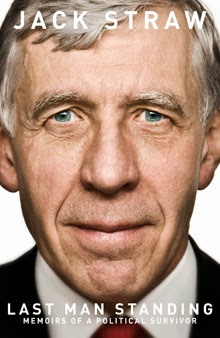 I have just finished reading the autobiography of Jack Straw MP, formerly UK Foreign Secretary, Home Secretary, and Lord Chancellor in the Blair /Brown Governments.
The book is entitled “Last Man Standing” in reference to the fact that Jack Straw survived as a Minister through the whole New Labour period in office.
His book is well written and clear, and especially interesting on his, at times painful, family background.
Although from a relatively impoverished family, he won a scholarship to a boarding school, and subsequently became a barrister.
He then became a political advisor to Barbara Castle, and succeeded her as Labour MP for Blackburn in Lancashire in 1979.
The author’s affection for the Labour Party and for his constituents in Blackburn shines through the whole book. He enjoys constituency work, and , unlike many MPs in safe seats, he returns to his constituency on a regular basis.
Straw is highly critical of the style of governing of both of the Prime Ministers  under whom he served.
Blair bypassed formal Cabinet and Cabinet committee processes.
Straw believes that if these processes were followed, some of the mistakes the Government made would have been avoided because weak arguments would have been properly tested. He also argues that the informal style of governing under Blair delegated far too much freedom to the Chancellor of the Exchequer, Gordon Brown, and that this worked to the disadvantage of Tony Blair himself.
Gordon Brown attempted to restore Cabinet government, but was secretive, suspicious and indecisive at key moments.
At the end of his book, Jack Straw calls for legislation to guarantee collective Cabinet responsibility. He is also critical of overly frequent Cabinet reshuffles, a problem that is less severe when there is a coalition government.
He is also critical of Tony Blair’s unquestioning support for Israel, which ultimately led to his downfall. As he puts it, Tony Blair was ”always prepared to give Israel the benefit of the doubt , even when there was no doubt” .
Questioned in the House in 2006, Tony Blair could not bring himself to criticise the disproportionate nature of Israel’s attack on Lebanon , in response to Hezbollah attacks on Israel. Notwithstanding the large number of civilian casualties in Lebanon caused by Israeli firepower, Blair blamed Hezbollah for everything. This was so far out of line with opinion in his own party that it was the tipping point that led to his downfall.
The book is not very convincing on the authors own support, as Foreign Secretary, for the invasion of Iraq. While he makes the valid and often ignored point that everybody, including the Russians and Chinese, believed Saddam Hussein did actually have weapons of mass destruction, it is not clear why more time could not have been given to inspections before launching the invasion. It is also unclear why the UK did not insist on involvement in post invasion planning, as a condition for involvement in the invasion and occupation.
Healthy military alliances, like healthy coalition governments, require often laboriously time consuming consultation in private, before big and irrevocable decisions are taken.
Print Entry

IRELAND AND BRAZIL…WHAT CAN WE LEARN FROM ONE ANOTHER?