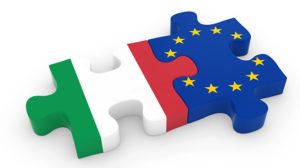 Despite the 11th hour agreement to form a new government in Rome, Italy still has the potential to send Europe into depression, if the costly promises made in the election campaign are kept, and long overdue and difficult reforms further postponed.

What could trigger this?

The parties in the new Italian coalition government, 5 Star and the Lega, promised during the election

These measures could bring the budget deficit from its present 1.9% of GDP to a staggering 7% of GDP. That would certainly create a financial crisis. It would break EU rules too.

It would also impoverish Italian voters, especially older Italians with savings . Despite years of low growth, the average Italian household still has more net wealth than the average German household. But a lot of that wealth is tied up with the Italian banks and their bonds.

Overall, two thirds of Italian government bonds are owned by Italian residents, including Italian banks, so many Italian households would be suddenly impoverished if these bonds were devalued. A sudden rise in interest rates in Italy would devalue bonds that had been issued at a lower rate of interest. Of course leaving the euro would devalue them even more.

48% of the bonds of the Italian government are held by Italian banks themselves. A loss of confidence in Italian bonds could destroy the capital base of some Italian banks. That could lead to a run on the banks, like the Northern Rock situation.

But the ECB would have to insist on the austerity measures. Otherwise, it would be simply sending good money after bad, something that would not appeal to European taxpayers who are the ultimate owners of the ECB.

For the last 10 years, Italian politicians, including the parties who lost the recent Italian General Election as well as those who won, have been blaming the constraints of euro membership, and the disciplines supposedly imposed by Brussels and Germany, for the sluggish performance of the Italian economy, and for the fact that Italian wages are still far below what they were in 2007.

But, as a recent IMF study of the Italian economy shows, the reasons for stagnant incomes in Italy are to be found in Italy itself, not in Brussels.

Since 2000, the total factor productivity of the Italian economy has fallen by 6 %, whereas productivity in Spain has risen by 2% and in France by 4%.

France and Spain are in the euro too, so euro membership does not explain Italy’s under performance.

Italy’s problems derive from a number of factors.

One is the big increase in its spending and debt levels that took place in the 1980’s.

Another is the fact that its administrative and legal systems have inhibited the reallocation of Italian talent, money, and effort from less productive to more productive activities.

The arteries of the Italian economy are blocked by a sluggish parliamentary and courts system, by out of date insolvency laws, and by an over large public sector. Wages are set centrally with little regard to the profitability of individual firms. A lot of capital is tied up in zombie businesses, many state owned.

Reforms have been made by previous governments to liberalize the labour market and the professions, but these will take time to yield results, and are insufficient on their own.

Italy is a rapidly ageing society, so the proposed reversal of the recent pension reforms by the new government would worsen the situation.

On the other hand, the new government’s flat tax and basic income proposals could, if combined with radical measures to combat tax evasion, remove tax shelters and  improve work incentives, improve the overall efficiency of Italy.

Euro membership has prevented Italy from using the devaluation to restore competitiveness at the price of higher inflation. Older Italians have benefitted from this. Italian savers (mainly older people) have been protected from the devaluation of their savings, through inflation. that took place before the euro.

But the failure to free up the arteries of the Italian economy through structural reform has meant that job seekers (mainly younger people) have suffered. Many talented young Italians have emigrated, some to Ireland.

The new Italian government could tilt the balance in favour of young Italy, and attract those young people home, if it combined its popular tax and welfare plans with, much less popular but equally urgent, reforms to administration, the courts, wage setting,  insolvency and pensions.

The first big test will come in October when a budget has to be presented. That is when the new government’s real  priorities will be revealed.

Brexit and the island of Ireland: the all-Ireland economy and the border question