Ireland at the United Nations, memories of the early years 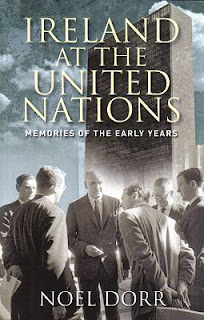 Book Review for the Irish Independent by John Bruton

Title: Ireland at the United Nations, memories of the early years by Noel Dorr

Ireland applied but was not allowed to join the United Nations when it was formed in 1946, because the country had not supported the Allied cause in the Second World War. Joining the UN involved becoming committed to use force to deter aggression by one state against another if the UN so decided . It was not considered that a country which abstained from opposing Hitler would meet that requirement.

In the Dail debate in 1946 on Irelands application to join the UN, Eamon de Valera made the dubious claim that he would have sent Irish forces to fight against Italy over its attack on Ethiopia in 1936, if the UNs predecessor the League had so decided .But there is no record of his saying so in 1936. When Ireland eventually joined in 1956, the commitment to use force in such circumstances remained in the UN Charter, but it has not been invoked since .

This is a well written and accessible book. It has entertaining pen pictures of the characters who influenced Irelands early involvement in UN affairs, politicians like Irish Foreign Minister Frank Aiken and his Indian counterpart Krishna Menon, and diplomats like Freddie Boland, Con Cremin , Conor Cruise O Brien, and Eamon Kennedy.

Frank Aiken’s character dominates the book. He enjoyed great freedom to determine policy while de Valera was Taoiseach , but a little less when Sean Lemass took over, because by then Ireland wanted to join the European Common Market and Lemass avoided stances that might alienate those who would decide on Ireland’s application. Lemass was also instinctively more pro American.

Aiken’s approach was shaped by his experience fighting the British from 1916 to 1921. He strongly favoured self determination, for the Africans, the Tibetans and even for the Taiwanese. But he argued that the existence of the UN now made it much less necessary to use force to achieve self determination than it had been in his time .

He spent far more time in New York at UN meetings in New York than other Foreign Ministers. He pioneered the UN resolutions that led to the Nuclear Non Proliferation Treaty. He even foresaw the danger of nuclear weapons getting into the hands of terrorists, a concern that has become more general since 9/11.

The author of this book, Noel Dorr is a retired diplomat who was Secretary General of the Department of Foreign Affairs. While he presents the book as personal memoir, it is more than that. It is a lucid contribution to recent Irish history. It is to be hoped that Noel Dorr will take up his pen again, perhaps to do a full biography of Frank Aiken.