IRELAND and the ARAB world. 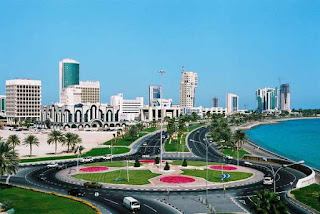 I have just returned from a week’s visit to Saudi Arabia, Bahrain, Abu Dhabi, Dubai and Qatar .

Apart from Dubai, these are countries with substantial surplus cash, derived from oil and gas revenues. One of my goals on the trip was to encourage investors from these countries to use the highly sophisticated financial services industry in Ireland to maximise the return on, and to minimise the risks to, their global investments.
I was accompanied on the mission by Irish experts on international banking, funds management, and aircraft leasing. Also on the party were representatives from the IDA, Enterprise Ireland, the Department of Finance, the Central Bank, and the Irish Stock Exchange. The Irish Ambassadors to Saudi Arabia and to the United Arab Emirates played a big part in making the visit effective. Irish business people are very influential in all these countries and are using their networks to help their home country .
In Saudi Arabia, I met HRH Prince Alwaleed bin Talal of Kingdom Holdings, and the Governor of the Central Bank of Saudi Arabia, Dr Mohammad al Jasser.
I met the Governor of the Central Bank of Bahrain, Rasheed Mohammad Al Maraj, and the Governor of the Central Bank of Qatar, Sheikh Abdullah Saoud Al Thani.
I also gave television interviews to CNBC and Al Jazeera.
We were very well received. Our visit enabled us to draw a clear distinction between
Ireland’s internationally oriented financial services industry, which is in excellent health and is expanding,
and the Irish domestic banking sector , which has not been managed properly and is only beginning to resolve its problems.
This is a good time to invest in Ireland, as asset prices and costs are now much more competitive than they were in 2006. Only by visiting these countries in person and putting this message across on a face to face basis, can one counter the negative impression created by the resort to an IMF/EU aid package.
The striking impression in all the countries we visited was of very rapid economic development. New and adventurously designed office blocks, and magnificent mosques and museums are being built in all the major cities. The grand mosque in Abu Dhabi is a magnificent modern example of faith inspired architecture. The Museum of Islamic Art in Doha, the capital city of Qatar, will attract visitors from all over the world, especially in the period leading up to Qatar’s hosting of the World Cup in 2022.
There is, of course, fragility in this prosperity. The breakdown in the peace process between Israel and the Palestinian Authority, the continued Israeli settlement in occupied East Jerusalem, and the Iranian nuclear programme create significant political risks.
Taking account of its own record in promoting civil rights, I believe the United States should, if it is serious about a two state solution in Palestine, spell out a detailed US position on the exact boundary there should be between the two states, including in Jerusalem, and on the rights of minorities on either sides of any border between them. The response to such an initiative would clarify whether both sides are actually serious about creating two states. It is both unfair and dangerous to pretend that a basis for agreement on two states exists, if it does not.
Print Entry

Time for Unity of Purpose and Clarity of Vision