HOW THE IRISH CONSTITUTION OF 1937 CAME ABOUT, AND WHY IT HAS PROVED SO DURABLE. 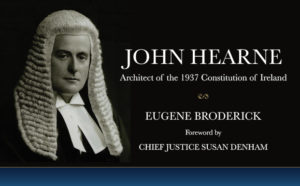 A study of all constitutions promulgated since 1789, by the Chicago Law School, found that the average constitution lasted a mere 17 years before it was replaced. By that measure, the Irish Constitution, which will be 80 years old next month, has been a remarkably durable document. Indeed it is now one of the world’s oldest written constitutions.

Eugene Broderick, the author of this book on the subject, attributes the durability of the Irish constitutions to the fact that it can be amended by referendum and reinterpreted through court judgements. In that sense, the present constitution lives up to the standard set for a constitution by Eamon de Valera, in 1933 before he started preparing it, that it should be “not a cast iron constitution, but a flexible constitution”.

According to Broderick, most of the actual drafting of the articles of the constitution was done by the then legal advisor to the Department of External Affairs, John Hearne.

A REDMONDITE WHO WORKED WITH DE VALERA

Hearne is an unusual character. A native of Waterford City, he was a strong supporter of John Redmond, and helped his son, William Archer Redmond to defeat the Sinn Fein candidate in the Bye and General Elections of 1918. Hearne was a prominent public speaker in the campaigns, and earned a name as “the boy orator” of the Irish Party. He was one of a generation of young men, who would have risen to prominence in a Home Rule Ireland, but who had to find another way forward when Home Rule was buried by the violence initiated in Easter Week of 1916.

Hearne’s way forward was initially as a barrister, and then as a legal officer in the Free State army. In 1924, he joined the civil service and remained a civil servant until he retired in 1960. His first post was as Assistant Parliamentary Draftsman in the Office of the Attorney General. He became an expert in international constitutional law, and helped Free State Ministers, like Paddy McGilligan, and Kevin O Higgins, to loosen the bonds set in the Treaty and thereby move Ireland towards full independence, by exclusively constitutional methods. Many of the issues Hearne dealt with in the 1920’s, like the court that should decide final appeals, are coming up again, as the UK tries to unravel its 40 years of legal commitments with its EU partners.

When de Valera won power in the 1932 Election, he admitted that he was surprised by the amount of progress he found had already been made by his predecessors in enhancing the sovereignty of the Irish state.

But he still adhered to his Civil War opinion, that the Free State Constitution, under which he had come to office, was something imposed on Ireland by the threat of force.

Therefore he saw a new constitution, freely adopted by the Irish people in a referendum, as the ultimate expression of sovereignty.

When de Valera sat down to prepare a draft constitution, he did so within a very narrow circle of advisors, and the principal one was John Hearne.

This is surprising given Hearne’s political antecedents. But Hearne had unequalled expertise in the constitutions of other countries, and fully accepted de Valera’s goal of shaking off the remnants of British influence. De Valera and Hearne worked into the late hours, often in Hearne’s home, drafting and redrafting the articles of the proposed constitution.

Broderick deals with the external influences brought to bear on the draft. Ministers, other than de Valera himself, seem to have played little part. De Valera preferred to work with civil servants over whom he had more control, rather than Ministers.

RELIGIOUS ASPECTS SHOULD NOT CAUSE SURPRISE, GIVEN THE VIEWS OF IRISH PEOPLE AT THE TIME

Religious thinking about social matters influenced the constitution for the simple reason that it influenced the Irish people in their daily lives. In the 1930’s, Ireland was a very religious country. In the destructive and nihilistic aftermath of War of Independence, the Catholic faith was seen by many as a better expression of the people’s distinctive identity. That is why it influenced the constitution. Fianna Fail, and all the other parties in the 1930’s, were profoundly influenced by Catholic Social teaching ,so it is not surprising at all that this teaching would have been taken into account.

As a practical politician, de Valera did not want the Catholic Church to oppose the proposed constitution.

Broderick says the ban on divorce was not controversial with other Christian churches at the time.

John Charles McQuaid, not yet a bishop but the Headmaster at the time of De Valera’s old school in Blackrock, played little part in drafting the constitution.

BUT THE CONSTITUTION DID NOT ACCOMMODATE THE POSSIBILITY OF A UNITED IRELAND IN ANY PRACTICAL WAY.

This was a constitution written for the 26 counties which de Valera actually governed. It was not designed for a 32 county Ireland. If it was it would have been drafted differently.

As Broderick puts it “Sovereignty took precedence over reunification”. This was realistic, and therefore right, in the circumstances.

Unrealistic aspirations, like reunification and the restoration of the Irish language, were included in the constitution in order to garner support for it in the referendum. The difficulties with these aspirations were ignored and this inevitably led to disappointment and cynicism.

One fault I would find with this book is that it tells us little or nothing about John Hearne’s subsequent career, as Irish Ambassador to Canada, and to the US, and his time as legal advisor to the new Nigerian government in the 1960’s. Apart from the fact that his wife provided sandwiches for Dev for the late night drafting sessions, Hearne’s marriage is hardly mentioned. It is almost as if his life stopped, once the constitution was adopted.

That criticism aside, anyone who wants to understand the genesis of our constitution, should read this important and well-written book.

It is entitled  “John Hearne, Architect of the 1937 Constitution of Ireland” , the author is  Eugene Broderick and the book was published by the Irish Academic Press.