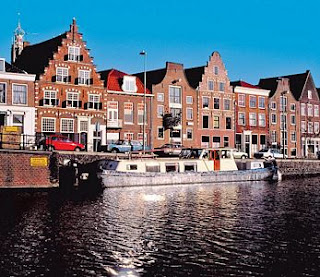 Last week, I had the chance to visit a place I had never been before, Haarlem in the Netherlands. I was there at the invitation of the Innovation Platform , established by the Government to motivate the Netherlands to become more innovative so that it can pay its way in the highly competitive world of the 21st century .

Haarlem is a beautiful city of canals, old houses, and church squares. I was fortunate to have a few hours to walk around the city to see it for myself. The people were really friendly.

The Netherlands Government’s paper on innovation, which was discussed at the conference, is very interesting. It is self-critical, and does not attempt to hide flaws in the country’s economic model.

While the country has come relatively well through the current economic crisis, its big companies are not as innovative or profitable as those of its German neighbour . The country tends to rely on a few well established big companies. In 2003, only 8% of Dutch companies were in the fast growing category, as against 26% in Italy, 14% in Spain, 13% in the US, and 9% in Finland.

Conservatism may be related to the age of those making key economic decisions. The private capital of people aged 65 or over accounts for more than half of all the private wealth of the country . At the other end of the age spectrum, the Netherlands has a prospective shortage of technology graduates.

My own sense is that economically viable innovation comes from contact with customers and consumers, as well as from abstract work in laboratories.

Innovation is a cultural state of mind as much as a technical process. Saving is good so long as others are able and willing to borrow and to spend. If they are not, the economy will stagnate. German economic policy makers need to keep this in mind as we seek to devise a sound common economic policy for the eurozone, as we are required to do by EU Treaties.

If universities are to help with innovation they must be willing to see some of their academics working with the customer support teams of companies where they will see what customers really want and will pay for and use, rather than make assumptions about those things. That element has been missing from Irish efforts to promote innovation. Ireland, on the other hand, scores better than the Netherlands in supports for individual entrepreneurs. Ireland’s recent paper on innovation is much less self critical that the Dutch one.

Cornered, The new Monopoly Capitalism and the Economics of Destruction

The Dail in the 21st Century – book review