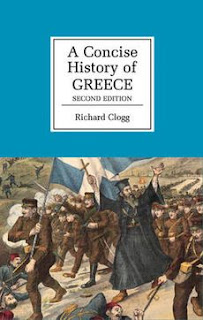 I have just finished reading “A Concise History of Greece” by Richard Clogg, published by Cambridge University Press. I am travelling to Greece next week to talk about economic development and the book was part of my preparation.
Modern Greece came into being in stages. The Greece that gained independence from the Ottoman Empire in 1831 consisted only of the southern portion of modern mainland Greece. Other bits were added in 1864, 1881, 1913 and 1920.
In 1923, Greece, after an unsuccessful war with Turkey, had to take in about 1 million Greek refugees who had to leave Turkey.
This war had been initiated partly on foot of Allied promises to Greece of “territorial concessions” in areas of what is now Turkey, but which were then inhabited by people of Greek heritage. These promises were designed to induce Greece to join the Allied side in the Great War. Involvement in the Great War was a matter of deep and lasting division in Greek politics.
For much of the 19th and early 20th centuries, Greek politics had been bewitched by the so called ”Great Idea” of uniting all people of Greek heritage in the Near East, in a state whose capital would be Constantinople. This would, in effect, have reversed the 1453 conquest of Constantinople by the Turks, and would have brought together in one state, Greek communities in parts of what is now Turkey, in Cyprus, parts of Albania, as well as all of modern Greece.
Through much of recent history, the energies of Greece, and of its people, have tended to be devoted to this type of territorial ambition, rather than to the   development of lands the Greek state already controlled. This has also led to Greece spending more on military affairs than was the European norm.
The Second World War was a terrible experience for Greece. Having defeated an Italian invasion, it was overwhelmed by Germany, and suffered a famine under the German occupation. This was followed by a civil war between anti Communist and pro Communist resistance forces, which retarded post war recovery.
From early on, Greece had a much larger public sector than was usual, and public sector jobs, often obtained by political patronage, were the chosen route out of poverty for many families. One very prominent early 20th century Greek politician, George Rallis, reputedly had 1000 godchildren, whose parents must have hoped he could find them all public sector jobs when they came of age!
Public sector workers are an important constituency in Greek politics. But the effectiveness of the public sector is questionable. Greek courts get new cases at a rate of 8000 per year, but only decide them at a rate of 3000 per year. The pupil teacher ratio is about half that in Germany, but Greek educational performance is not commensurately better.
Greece has a history of poor export performance, and of debt problems in the public sector. In 1893, and again in 1933, it got into financial difficulties with its overseas creditors, partly because its limited foreign earnings from tobacco, olive oil, and currants were insufficient to service its foreign debts. Even today, Greece’s export sector is weak, and this must be put right.
Pensions in Greece were recently at an average rate of 93% of general earnings from work, whereas German and British pensions are only 40%, and 30%, respectively of general earnings in those countries.
Today’s problems in Greece have deep roots, some going back even to the times before it gained its independence.
Richard Clogg’s book will help readers put them in context, and should encourage patient support for today’s Greek politicians, as they try to overcome a legacy that is far less simple than instant
Print Entry