GREECE ON THE RACK…. 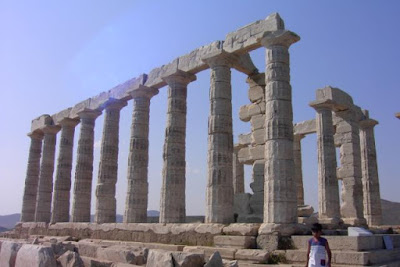 WHERE WILL THE CHAIN REACTION LEAD?
WHAT LESSONS MUST EUROPE LEARN?
The world is watching the political and economic situation of Greece with uncomfortable fascination. There is a widespread fear that, if Greece is unable to pay its debts, there will be a chain reaction.
The first part of the chain reaction could affect the solvency of some European and American banks who lent to Greece, and who would not be getting all their money back.  Those who sold credit default swaps with those banks could also be caught.
The second part of the chain reaction would affect other Governments, who may not have quite as difficult a situation as Greece, but who, like Greece, have to borrow to cover day to day expenses because their tax revenue is insufficient to cover their outgoings. Ireland is in this category.  Lenders who lose money they had lent to the Greek Government, would be even less willing, than they are now, to lend to other Governments. A 21st century precedent of an advanced European country defaulting on its debts would have unknowable consequences in a fragile and volatile world.
I have read a recent publication by a German economic think tank, the Ifo Institute, about Greece.
The conclusion I drew from it was that the problems, now coming to a head in Greece, have been obvious and knowable for at least twenty years, long before Greece joined the euro.
If mechanisms were not insisted upon to remedy those problems, before Greece joined the euro, then responsibility must be shared for that by all the member Governments of the euro, who admitted   Greece into the euro. The European institutions, that were supposed to be examining the  accounts of the Greek
Government to ensure that those accounts presented an accurate picture of Greece’s real liabilities, have to answer for their omissions too.
Greece was one of the fastest growing economies in Europe from 1950 to 1973, but thereafter it stagnated. But public spending went on growing, from 23% of GDP in 1970, to 30% in 1980, and to  49% in 1990. By 2009, it was 52% of GDP.  A lot of the money went to pensions and extra public sectors jobs.   Whenever a Greek politician arrived at an international meeting, he was accompanied by an entourage that was four times as big as any other.
But tax revenue was not keeping pace. The Government  debt level grew  especially  quickly in the  1990s when guaranteed debt of state companies  were taken onto the Governments own  balance sheet, and  money the Government borrowed from its own  Central  Bank had to be properly accounted for.  This was known before Greece was admitted to the euro.
Greece does have a tax collection problem.
This is because it has such an exceptionally high proportion of its workforce who are self employed, or who are in the non traded sector of the economy ( ie. sectors who cannot export their services, like doctors, shopkeepers etc.).  The extent to which people pay due taxes is lower than elsewhere in these two sectors………almost everywhere in the world. Seemingly tax evasion by the Greek self employed in not much worse than by the self employed in the  US, the Greek problem is that  self employed people make up a much  bigger share of the Greek economy, than they do  of the US economy.  Greece’s tax collection problem thus has more to do with the structure of its economy, than with any uniquely Greek aversion to paying tax.
All these facts must have been  known to the European Central Bank, the Banque de France, Bafin (the German regulator), and all the other  supervisory authorities, when  the banks they were supervising  lent  vast sums to the Greek Government, during  period  since Greece joined the euro.  While its exact scale may have been concealed by accounting tricks by the last Greek Government , the fact that there was a huge problem  was knowable.
I believe that it is time to face up to the full extent of the sovereign debt and banking problem in Europe.
We need now is a ten year plan for the euro zone, not just a ten month plan!
Europe must align its income expectations to its productivity. At the moment, the first is running well ahead of the second. Productivity must catch up, or income expectations must fall back.  In some cases, the gap will take years to close.  These  social choices are unavoidable, but  have to be made in a democratic way.
Voters are able to face reality, so long as everything is laid out before them.
In the countries who lent foolishly, as much as in those who borrowed foolishly, the authorities should own up to their share in the mistakes.  That has not happened yet in every case.
Once that is done, Europe can move on more convincingly
1.)   to devise a political structure to prevent irresponsible borrowing by Governments, ( One suggestion is an EU veto on national budgets)
2.)   to increase productivity and allocate scarce resources more wisely, (This is more  difficult because it requires action by the private sector, which has  misallocated time and money in the past)
3.)  to slim down the financial sector, (This is not happening, layoffs are taking place everywhere except where the problem started!)
4.)  to make banks safe to fail, rather than too big to fail, (This requires  a much higher capital ratio) and
5.) to build a large contingency fund, by contributions from all members, that will stand behind Governments who have kept the rules, but who face temporary  difficulties beyond their control.  Until a fund is built up, standing behind weaker countries involves a risk for  countries who have good credit ratings and who have to pledge that credit to help out  the weaker countries.
Print Entry