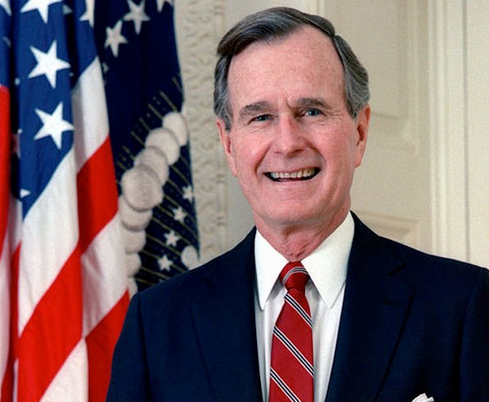 I met former President George HW Bush only once, and long after he had left high office, at a private event in Co Kildare.

The characteristics I remember of him then were his exceptional politeness and humility, as well as evidence of his physical courage.

His politeness was demonstrated in the time he took with all the people he met at the event and his obvious lack of self importance.

His courage emerged when he described how, no longer a young man at the time, he was training to do a parachute jump in Texas.

It transpired that the parachute jump was intended to exorcise a tragic war time experience, when his Air Force plane was shot down in the Pacific in 1944. I understand he later fulfilled his goal without injury. He had had direct experience of war and that was why, as President, he was economical in the use of US military power.

When Communism collapsed, George HW Bush proposed to Europe the vision of a continent “whole and free”, from the Atlantic to the Urals.

For a time, it looked as of his goal might be achieved.  It has not been, for a variety of reasons some of which have their roots in mistrust and suspicion between Europeans themselves.

The best way to remember George HW Bush now would be if Europeans could draw back from the confrontations between Russia and Ukraine, and from the authoritarian populism we see in some European countries, not only Russia.

It is not too late to devise a credible security architecture that encompasses all of the continent.