DIFFERING OPINIONS ABOUT THE EU 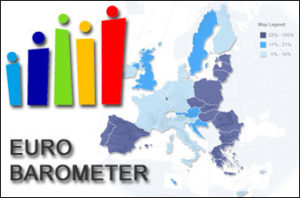 The recent Eurobarometer poll (taken in September/October 2016) gives a good insight into the problems European Union leaders will face in crafting a unified response to the multiplicity of challenges it now faces.

It tells us that voters, in the different EU countries, see the EU very differently.

IS IT GOOD TO BE IN THE EU?

On the question of whether membership of the EU is a good thing,

But at the other end of the scale, only

Interestingly 47% of British voters said they thought it was good for the UK to be in the EU, which is a better score than 8 other EU states.

The finding in regard to opinions in Italy about the value of being in the EU is very worrying, in light of the forthcoming referendum there, and the huge debt problems Italy faces, for which it may need help from the rest of the EU.

If Italians have such a low opinion of the EU, are they likely to accept EU terms for help?

It would appear that Italian voters blame the EU for the fact that their economy is growing more slowly, for a longer time, than almost any other EU state.

Before the euro, Italy was able to adjust to a loss of competitiveness by devaluing its currency . Now Italy and its banks owe money in a hard currency and they no longer have the option of devaluing some of their debts away.

HAS YOUR COUNTRY BENEFITTED ECONOMICALLY FROM BEING IN THE EU?

60% of EU voters think their country has benefitted from being in the EU,

Remarkably 56% of UK voters said they felt their country benefitted from being in the EU, even though they had just votes to leave it!Obviously non economic factors swayed the vote in the UK referendum.

The countries , where the biggest majorities feel their countries have benefitted from being in the EU, are

WHAT IS THE QUALITY OF EUROPEAN DEMOCRACY?

Some argue that there is a crisis in European democracy, in the sense that voters do not feel that their vote counts, in their own country, or in the EU.

Denmark and Sweden are the countries where voters feel their vote counts the most, at both EU and national levels.

The countries where people feel their vote counts the least include Greece, Lithuania, Cyprus, Italy and Spain.

These findings would suggest that action to improve voter involvement in decision making need to be taken both by states themselves and at EU level.

WHAT DO YOU THINK OF THE EUROPEAN PARLIAMENT?

Another question asked was about whether voters had a positive view of the European Parliament.

38% of Irish voters have a positive view of the Parliament, which is the 3rd highest score of the 28 countries.

Anti EU feeling in France is a worry, as the French Presidential election nears.

THE MECHANICS OF BREXIT AND ITS EFFECT ON IRELAND