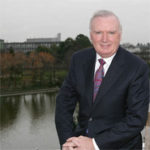 I wish to express a deep sense of loss on hearing of the death of former Ambassador, Dermot Gallagher, who I consider to have been a great friend and neighbour, as well as a brilliant servant of Ireland.

Dermot was Irish Ambassador in the United States during my time as Taoiseach.

On my first arrival in Washington as Taoiseach in March 1995, I was immediately struck by the depth of the links all over the United States, but particularly in policy making circles in Washington, that Dermot, and indeed his wife Maeve, had built up on behalf of Ireland.

These links extended right across both US political parties, and across all three branches of the US government.  This influence on behalf of Ireland was the result of immensely hard work and patience on Dermot’s part. He was instrumental in securing US support for the process of peace building in Ireland, and notably in securing the services of Senator George Mitchell.

He was a model Ambassador. He provided very valuable advice to me when it was my honour to fill a similar role subsequently.