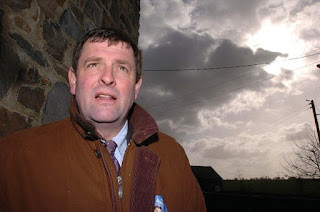 I am shocked to learn of the death of Shane McEntee. He was deeply devoted to his family, his wife, Kathleen, his children, mother, Madge and wider circle. He is a huge loss.
He was a man of unlimited emotional, and practical, commitment to any task he took on. It absorbed him totally. No effort was ever spared. I remember recently asking him to assist a disabled neighbour in getting adequate care, and the lengths he and his office  went to, to help out in this  case, were without limit.
He was a great success in politics. His victory in the 2005 by election testified to his deep identification with the people of Meath, and theirs with him. This by election victory was, it transpired, to be a turning point in Irish politics and greatly strengthened Fine Gael leading to its eventual success in the 2011 General Election. He always gave immense time to listen to people and their problems, and to be with them in their times of sorrow.
As a Minister, Shane was able to bring unique expertise to bear in promoting Irish food and horticulture. He had deep practical experience as a farmer, but he had also run a very good restaurant in Nobber, which had attracted custom from far and wide. So he understood, and could speak with unequalled authority, on every aspect of the business.
He was passionately interested in Gaelic football, and had a deep practical and theoretical understanding of the game. He trained , at different times, the Nobber, Ballinlough, Castletown and Walterstown teams and was very successful. He brought from  football to politics a deep sense of loyalty and of being part of a team.
He leaves a gaping void in the life of his family, his county and his country.
I extend heartfelt sympathy to his grieving wife and family
Print Entry