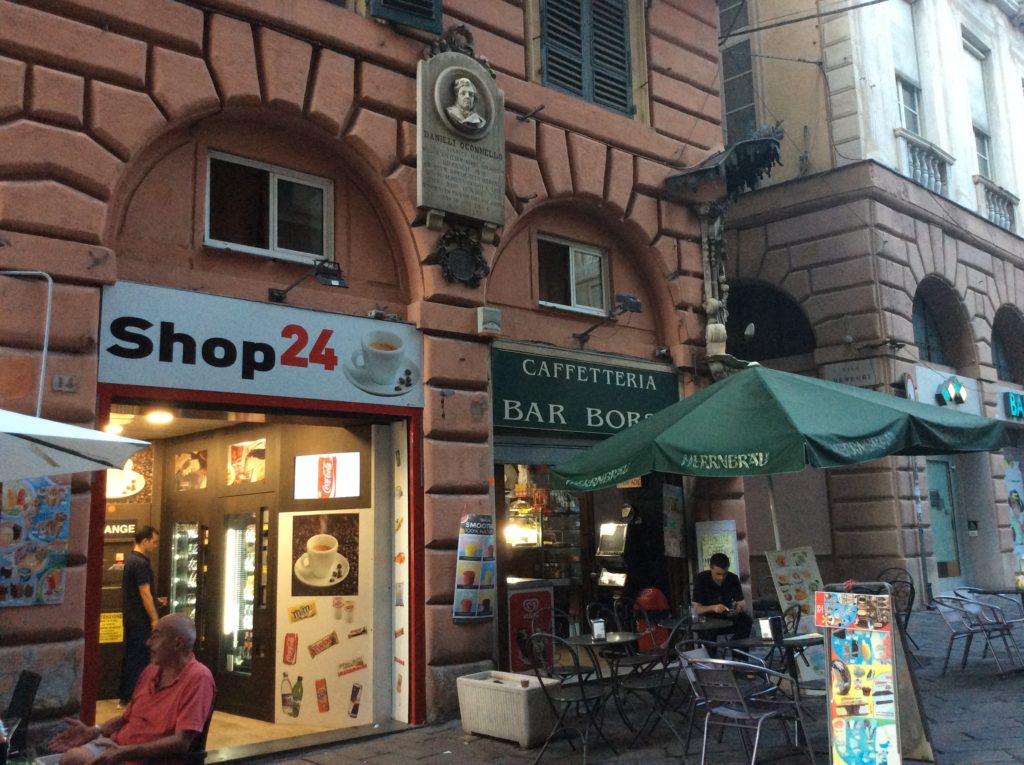 Last week I was in Genoa on holiday. I came across the house on the Via Al Ponte Reale where the great Irish democratic leader of the nineteenth century died in 1847, on his way to Rome.

Daniel O’Connell, who knew he was dying, wanted to have an audience with the Pope before he passed away. Unfortunately his death came too soon, in Genoa, where he had had to disembark because he had become so ill.

The house where he died is marked by two plaques, one in Latin erected shortly after his death, and another on the fiftieth anniversary of his death, by the Catholics of Genoa, in appreciation of his work for religious liberty.

The fact that he would be remembered in this way, fifty years after his death, is a sign of his immense international reputation. 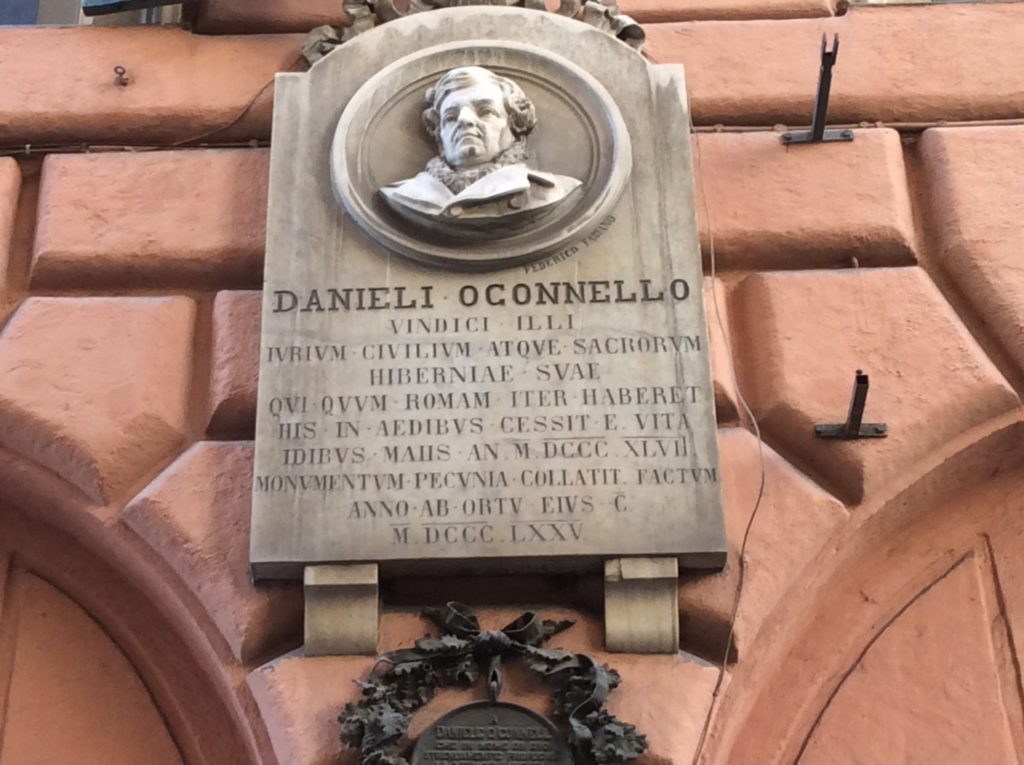 Throughout his political career from 1800 to 1847, O’Connell had a vision that extended far beyond Ireland.

As he said of himself “my sympathy is not confined to the narrow limits of my own green Ireland.”

In his first days as an MP after Catholic Emancipation allowed him to take his seat, he presented a petition from Cork against slavery in the colonies.

He suggested abolishing the practice of arresting people for debt without

judicial procedure, and he spoke in favour of a petition supporting the rights of Jews (who, like Catholics, had been denied the right to be MPs).

He favoured the secret ballot and the reform of Parliament. He fought against the remaining duties on Irish exports of malt, coal and paper to Britain. He would not have been a supporter of Brexit.

Although he was not familiar with Ulster, he did try to reach out to Loyalists, even going so far as drinking a toast to King William at a dinner in Drogheda, a risky thing to do at any time!

He made big financial sacrifices for the causes in which he believed. He could have taken up high legal office, forinstance as Master of the Rolls, a highly remunerative legal office, but chose to stay in Parliament, as an unpaid MP, to fight on for the Repeal of the Union.

Like any good politician, he was assiduous in answering his correspondence. At one stage he was answering up to 200 letters a day, and the postage alone cost him £10 per day, at a time when a £ was infinitely more valuable than it is today.

He had a deep aversion to politically motivated violence, an issue on which he differed with Thomas Davis and others who romanticised the 1798 Rebellion.

He told Dublin Corporation that, for a political purpose, he would

“not for all the universe consent to the effusion of a single drop of human blood except my own”.

On another occasion he said

“Human blood is no cement for the temple of human liberty.”

It was because of his fear of the loss of life that he called off the monster meeting at Clontarf, a decision which the Young Ireland leaders consented to at the time, but subsequently criticised.

Asked  afterwards to name the act of his political career of which he was most proud, he said it was not  Catholic Emancipation, but the decision to cancel  the mass meeting at Clontarf, and thereby prevent the

“plains of Clontarf being, for a second time, saturated with blood”.

He knew violence, once commenced, soon get beyond the control of its initiators, as we learned in the 1916 to 1923 period.

He believed in passive resistance, and was innovative in devising ways to use it. He pioneered mass meetings, and parish level political organisation. In that sense he was ahead of the rest of Europe. He was the founder of mass political participation, and this was recognised in other countries at the time.

He worked for human rights across the globe. His opposition to human slavery was not confined to the colonies of the British Empire.

He opposed slavery in the United States, unlike the Young Irelander, John Mitchell, who subsequently actively supported it.

His opposition to slavery in the United States was deeply appreciated by those agitating within the US itself, for the abolition of slavery.

He refused political donations from slaveholders in the US.

He attacked the attempt to establish Texas as an independent slave owning state seceding from Mexico.

He clashed with the, Irish born, Catholic Bishop Hughes of New York who criticised him for his “intolerable interference in American affairs”.

O’Connell’s most recent biographer, Patrick Geoghegan says his declarations on slavery were a key factor in alienating the Young Irelanders, who believed the Repeal Association should only address domestic, not foreign, affairs.

I believe that, to be true to O’Connell’s legacy, Irish people in the twenty-first century, must take their share of responsibility for facing up to the big international moral issues of our time.  They must not confine their concern to their “own green Ireland” .

I will be taking up this theme in an address I have been invited to give to the O’Connell Summer School, which takes place in Cahirsiveen Co Kerry close to O’Connell’s home in Derrynane. This address will take place in the Library in the town at 3 pm on Friday 25th August 2017. 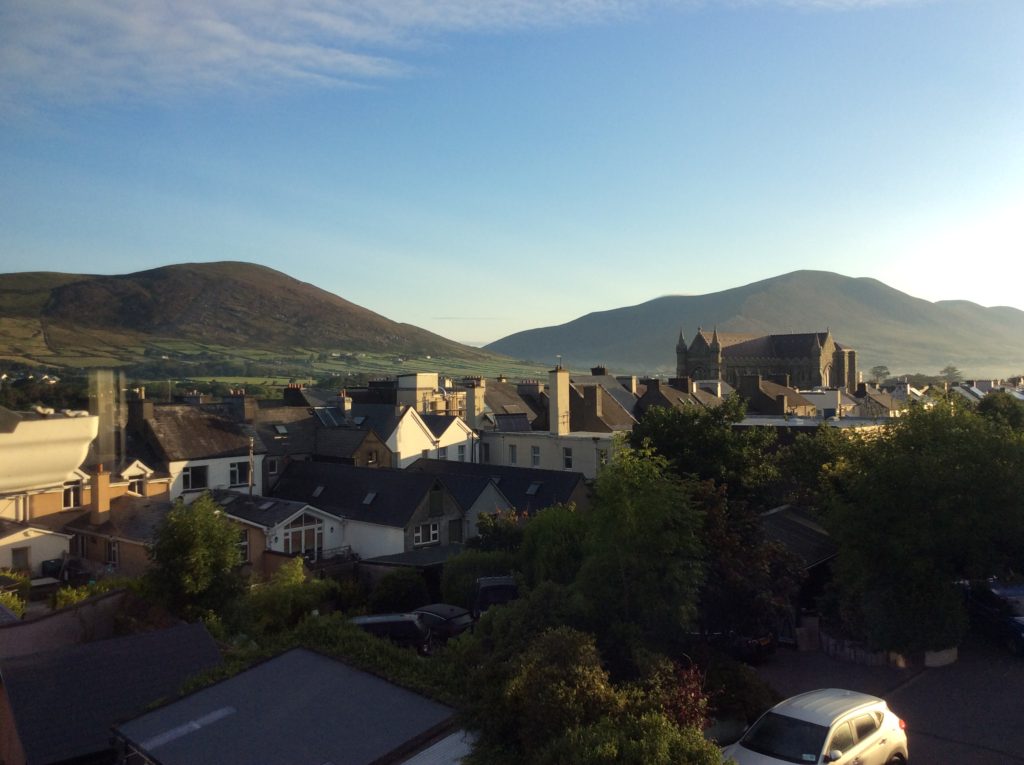 BREXIT, THE REFORM OF THE EU, AND IMMIGRATION