Cornered, The new Monopoly Capitalism and the Economics of Destruction 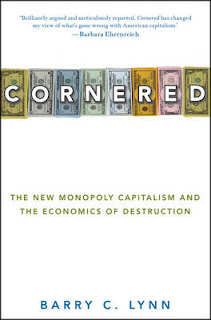 This book argues that the rash of mergers and leveraged buy outs that have been a feature of business on both sides of the Atlantic have led to a concentration of economic power that is politically and economically dangerous.

The problem of some corporations being “too big to fail” is not confined to banks that got so big that they had to be bailed out by taxpayers to prevent a collapse in credit and confidence.

Other sectors in the United States, such as grocery retailing, brewing , toothpaste manufacture, pet foods , are all demonstrated by the author to have become so concentrated in a few hands that the market in these goods is effectively “cornered’’. He claims that this has in led to a fall off in the innovation of new products in these fields, and that that in turn has led to a fall off in job creation.

He also argues that the drive to reduce costs has also led to several competing manufacturers relying on a single overseas supplier for certain components and that this make the whole system vulnerable to an event like an earthquake, a strike, or a war that might put the single supplier temporarily out of business.

He puts this all down to a change in policy that came about when President Ronald Reagan came to power in 1981. Under the influence of the Chicago school of economists led by Milton Friedman, the Reagan Administration bought the argument that Government control on mergers was too severe, that it involved unnecessary red tape for business, and that consumers did not benefit from it. The argument was that mergers often led to more efficiency and thus to lower prices to consumers. So mergers were to be permitted, unless it could be clearly shown that they would result in higher consumer prices.

Lynn accepts that the mergers often did result in lower prices in the short term , but he claims that in longer term they led to less diversity, to barriers to entry of small business to many markets, and to risks to the entire system of the kind we have seen recently in banking. He also argues that these mega mergers have led to an unhealthy concentration of political power.

Although this book deals with the United States, the forces it describes are obviously at work in Ireland and in Europe. The European Commission does question some mergers and monopolistic business practices, but it is often fighting an uphill battle. In Ireland competition policy is particularly weak because of a requirement to use our expensive courts system to get action on many issues.

This is not a diatribe against free markets in favour of Government intervention. Rather it is an argument that more state intervention is needed to ensure that markets are really free, in practice as well as in name.

This book should be read by the Minister for Enterprise and Employment, and by the EU Competition Commissioner, so that they can draw up new and transparent guidelines for Competition Policy that will ensure that no entity is ever again allowed to become too big to fail, that free enterprise means free entry to all markets, and cosy cartels become a thing of the past.

DOES EUROPE MATTER TO AMERICA ANYMORE?