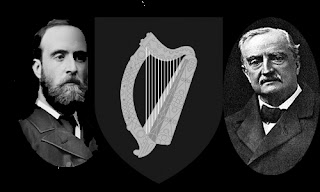 2011 is the centenary of the Ulster Covenant, 2013 is the centenary of the Dublin lockout, 2014 is the centenary of the passage into law of Home Rule, and 2016 will be the centenary of the Easter Rising .
How, or whether , we commemorate events that happened 100 years ago will tell us
who we are now, and
who we intend to be in the future.
Commemorations are, above all, educational exercises. They inculcate values, for good or ill. They can unite, they can also divide.
For this reason, I argue that, as well as commemorating  1916, in 2016, we should also commemorate the  1913 lock out in  2013,  and  the passage of Home Rule in 1914 in September 2014.
The men and women of 1916 were incredibly brave, they knew they were facing death. That bravery must be saluted. It inspired future generations.  So too did the idealism of those involved, which was eloquently expressed in the writings of Patrick Pearse. One must also recognise that, although it failed in its  immediate goals, the  rising was a  feat of organisation, that showed  what Irish people could do, and  countered the stereotypes about Irish people that were prevalent at the  time.  It gave confidence to those who founded the new state five years later.
In this generation we have, at last, reached a political accommodation between Unionism and Nationalism on this island. That was something that eluded successive previous generations of politicians. It eluded O Connell, it eluded Davis, it eluded de Valera, just as it eluded both Collins and Redmond.
Nothing must be done or said now, in any of our retrospections in 2016, that would put that very  recent reconciliation of Unionism and Nationalism at risk .
While we remember what  happened in Dublin in April  1916, we must not forget  that  other  great sacrifices were  by Irish people  in  the same year , notably the inspiring bravery ,and appalling  sacrifice,  in the Battle of the Somme, and  of other battles in  Northern France, where  thousands of Irishmen  gave their lives . Many of them hoped, as did Tom Kettle MP, who was killed in the same year, that the shared sacrifice in France, of Unionist and Nationalist soldiers, would heal the divisions between their communities at home.
Nor, when we commemorate the 1916 Rising, should we forget the uninvolved civilians, the police,  and others who had no choice in the matter, who lost their lives or their livelihoods in  Easter week in  1916 in Dublin. Their sacrifice was all the more real for being unsought.
But Irish history is not predominantly about battles. We   must ensure that our commemorations do  not  focus  only on physical force, whether on the fields of France or the streets of Dublin.
I believe it is really important, if we are to learn the right lessons from history, that we salute those who lived for Ireland, as well as those who died for it.
We must remember those who worked for decent living conditions and a more egalitarian society, people like Jim Larkin and William O Brien.  There will be an occasion to do that in 2013, the centenary of the Lock Out. The Irish Trade Union movement and its achievements must not be eclipsed by other commemorations, as they were for many years.
We must also properly commemorate the patient, peaceful and exhausting work for Irish legislative independence of Isaac Butt, Charles Stewart Parnell, John Dillon, John Redmond and Joe Devlin.
The time to do that will come on the 18thSeptember 2014, which will be   the centenary of the passage into law of Home Rule. The struggle for Home Rule had begun 40 years before at the Conference in Dublin, attended by 800 delegates,which established the Home Rule League, yet many people today forget that Home Rule was actually passed into law. Its implementation was postponed by the Great War, that was all.
40 years patient and skilful   parliamentary work, exploiting the weaknesses of opponents but also making judicious compromises, rallying support abroad while keeping support at home mobilized, culminated in the passage of the Act into law in 1914.  The passage of Home Rule was a triumph of democratic, non violent, politics.  Obtaining Home Rule in 1914 required the same qualities that John Hume exemplified in more recent times.
The Act was for Home Rule for all of Ireland, although the possibility of temporary exclusion of some Ulster counties was mooted.  After the passage of the Act the principle of Irish legislative independence had been irrevocably conceded, even by the Conservative and Unionist  party of the UK. This was something that was unthinkable even a few years before.
Continuance of Irish representation at Westminster under Home Rule, would have meant that total separation had not been achieved, but, on the other hand, that greater Irish parliamentary   influence at Westminster, would have made discriminatory policies, of the kind that occurred under Stormont from 1922 to 1972, totally impossible.
It is important, therefore, that Home Rule be commemorated, as a complement to the commemoration of Easter Week.
Today’s problems of Ireland, are ,in truth,  more susceptible to being solved by   the patient peaceful political methods, of the kind  deployed by Irish Home Rule advocates between 1873 and  1914, or , if necessary by the peaceful protests  of the kind deployed by Irish workers in  1913 ,  than they are  to  be are  by the methods used in  1916 .
As I said, commemoration is a form of education for the future. That is why we should remember 1913, and 1914, as well as 1916.
Print Entry

WHY IS IT THAT EUROPE IS UNDER PRESSURE, WHEN ITS DEBTS ARE LESS THAN UNITED STATES DEBTS?