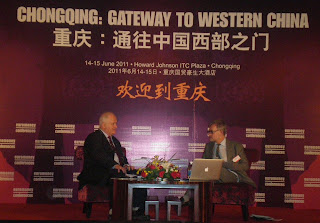 This week I was in Chongqing, one of the biggest cities in China, to address a business conference. Chongqing has a total population of 32 million people, of whom 10 million live in the city proper. I had expected that the weather would be very hot, but in fact it was misty, humid and showery, which was much more comfortable.
Chongqing is in the inland, western, part of China. It was the capital during the Second World War, when Japan occupied all of coastal eastern China from 1937 to 1945. It was heavily bombed  and 200,000 people lost their lives.
I had meetings with the Mayor, Professor Huang Qifan, and the Vice Mayor, Liu Xue Pu. I also had discussions with the Chongqing Financial Affairs Office, the Bank of Chongqing and with the Chongqing Rural Commercial Bank on the possibilities of closer links with Ireland and Europe. I told them about the international financial services industry in Ireland, which  services business  all over the world,  benefitting from the fact that Ireland  is the only English speaking country in  the euro currency.
Chongqing is growing very rapidly. It has the fastest economic growth rate (11% this year) in China.
It is a major manufacturer of cars and motor bikes, and is the largest producer of laptop computers in all China.  It is home to Asia’s largest aluminium plant. Electricity is provided by the nearby Three Gorges hydroelectric project, the largest in the world, whose construction required the resettlement of a million people.
The Mayor told me Chongqing is a transport hub for western China.  It is an inland port for oceangoing cargo coming up the Yangtze . It has links by rail to India, via Myanmar, and to Europe via Central Asia and Russia and a large international airport .  A pipeline is also being built bring Middle Eastern crude oil from the Indian ocean for refining in Chongqing.
All this is part of the rapid development of China.
In 1990, China was only 4% of the world economy. Now it is 14%.
In 2000, China contributed one tenth of all the economic growth in the world. Last year it contributed one third.
In 1990, 60% of Chinese people lived in absolute poverty. Now only 10% do so.
The growth is unevenly spread. Urban areas have experienced rapid growth in incomes, while rural areas have lagged behind. This has given rise to wide overall income inequality. But within urban China, income inequality is less than in the United States, and no greater than in Ireland or Britain.
Like Europe and the United States, China will eventually face a huge problem of supporting an enlarged elderly population. Age dependency in China will rise from 0.11 in 2010, to 0.24 in 2030, and to 0.43 in 2050. In this respect, China is very different to India, Africa and the Middle East which have had higher birth rates.  This difference in the rates of ageing of various  countries  will eventually change in balance of power in the world in ways that we have not yet begun to contemplate.
Chinese families are investing heavily in education. 22% of Chinese complete third level education. Only 8% of Indians do.
My major worry about the development of China is the extent to which it relies on coal to provide power. Coal burning has a very damaging effect on the climate.  Water supplies are also being depleted through irrigation and global warming.  In China, as in the United States, water from underground  reservoirs, that have been undisturbed  for millenia , are being run down  to supply  wasteful and unsustainable systems of  irrigation.
A shortage of water  affects the price of food.
It takes 20000 litres of water to produce 1 kilogram of meat, as against  just 1200  litres to produce a  kilogram of  grain.
As people  become better off, and want more meat in their diet, this will lead to more and more competition for  water resources, and  water is one thing Ireland is not short of…..yet!
Print Entry

GREECE ON THE RACK….

The Centre for European Studies