SYRIAN AND IRAQI CHRISTIANS BEING VICTIMISED EVEN IN EUROPE

It is disturbing to read of attacks on Syrian Christian asylum seekers, by Muslim fellow asylum seekers in reception centres in Germany. I am sure the blame for these outbreaks is shared.
There is a bitter civil war in Syria and it would not be surprising that some of  those fleeing the war would have had hard feelings towards some of their fellow countrymen and women.  But  if they are seeking asylum, these feelings should be left behind in Syria.
Some of the attacks on Syrian Christians are apparently being made by people who are not from Syria at all.
The chairman of the governing CDU parliamentary group, Volker Kauder, called on Muslim authorities in Germany to “clearly renounce attacks on Christians in the asylum homes”.
The call came after recorded incidents of anti-Christian attacks in a number of shelters.
In one case, reported by the German daily Die Welt newspaper, Muslim Chechens, who have nothing to do with Syria, assaulted Syrian Christians in a camp near Berlin.
The newspaper quotes a spokesperson for the country’s Central Council for Oriental Christians, Jakob Simon, who says that discrimination and blackmail against Christian refugees is now widespread.
“I’ve heard so many reports from Christian refugees who were attacked by conservative Muslims,” said Jacob, who added that recorded incidents were not the full story. “The number of unreported cases is much higher,” he insisted.
Perhaps he is exaggerating.  But if asylum seekers are bringing these attitudes with them to Europe, they have a distance to go, to become fully integrated into modern European society.
It also raises the pragmatic, but difficult, question of whether some religious groups will find it easier than others to integrate into European society. Refugee law, quite properly, takes no account of this, but it could become a pragmatic challenge in the years ahead.
There has been a recommendation by the deputy head of Germany’s police union, Jorg Radek to house refugees separately.
“I think housing, separated according to religion makes perfect sense,” said Radek, who added that Germany’s police are now stretched to the limits of their capabilities by duties in registering the vast numbers of refugees together with ending disputes between those now residing in holding centres.
The call has been echoed at the political level, with Germany’s former interior minister, Hans-Peter Friedrich stating: “It is sad, but obviously necessary, that we require the separation of asylum seekers according to religion.”
This issue may also be faced by the Irish authorities when we receive asylum seekers.
HOW COULD THE CIVIL WARS BE ENDED?
The ideal solution is an end to the civil wars in both Syria and Iraq, which feed off one another.
Both Syria and Iraq have artificial boundaries, drawn for the convenience of France and Britain during the First World War, without regard to local preferences. Now that settlement has come apart. In fact it never worked  very well because one group always dominated the others in both artificial countries.
A comprehensive agreed boundary revision, and the creation de facto of several new states may not be ideal, but it may be what is happening anyway .
How many more people will have to die before something along those lines if formally recognised?
The answer to that question is to be found in Teheran and Riyadh, rather than in Iraq or Syria.

ARE THE CONDITIONS BEING IMPOSED ON GREECE TOO SEVERE?

………….PROBABLY NOT, BUT GREECE NEEDS HELP WITH THE RECEPTION OF SYRIAN REFUGEES. 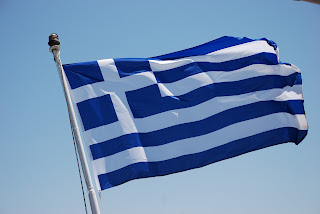 If Greeks themselves do not trust their own government and their own banks with their money, it is difficult to expect the taxpayers of other countries to do so. Yet that is what the critics of the severity of the conditions imposed for the third Greek bailout seem to expect.
The euro was not imposed on Greece. It was something that Greece joined of its own accord.
The fact that the possibility of Greece leaving the euro was raised by Germany, has been greeted by some as dealing a blow to the euro because it supposedly ended the notion of the euro being “irreversible”.
But nothing in political life is irreversible, even though some things, like the Byzantine and Ottoman Empires, did last a very long time indeed. “Irreversibility” was always a legal fiction, and fiction is not a sound basis for an economic policy.
The euro is a contingent compromise, where members trade some short term losses for greater long term gains. A euro, where rules were easily broken, would not endure.
I agree with those who say that, eventually, some of the Greek debt will have to written off. That is both financially necessary and morally just.
But that can only be contemplated when the Greek political and administrative system has reformed itself, and is capable of benefitting from a write off, and not looking at it as a precedent for a further write offs later on. We are not there yet.
The crucial difficulty seems to be that the Greek state does not work. The fact that Tsipras’ offer of reforms had to be crafted, not by Greek civil servants on their own, but with the help of French officials, tells its own story.
Some complain that elements of the package involve intrusion on Greek “sovereignty”. But a state is only sovereign to the extent that it is capable of performing the functions of a state and of fulfilling the internal and international responsibilities of a state.  I believe Greece needs help in this regard, and it would be good if the World Bank, as well as the IMF, were involved in helping Greece reform its public administration.
Recapitalising the Greek banks will be a major task. Interestingly the biggest exposure to the Greek banks is held by UK banks. The UK is not in the euro, and is not contributing to the Greek bailout, which could be regarded as unfair.
Some argue that the austerity, that Greece is going through to meet its international obligations, is damaging its economic growth prospects. In the short run, this is true. But fuelling temporary growth, by taking on even MORE debts, would not be  an answer. That would weaken longer term growth prospects, because of the additional debt service it  would entail.
The important way of  improving growth prospects is by  generating confidence. If people believe the future will be better, and can borrow money to invest in it, the economy will grow. With renewed confidence, some of the money that Greeks themselves have moved abroad will then come back to Greece. If the bailout terms are fully and quickly implemented, by both Greece and its creditors, that will restore confidence, especially if it is rewarded  by a prospect of some conditional and staged debt write offs.
Meanwhile Greece is in close proximity to the biggest refugee crisis in world history, caused by the Syrian and Iraqi civil wars. More migrants are now arriving in Greece from the Middle East, than are arriving in Italy from North Africa. 65% of the arrivals in Greece are Syrian.
Greece’s neighbour, Turkey, is already providing shelter for 1.8 million Syrian refugees. Meanwhile most Western countries are reluctant to take in any refugees. Greece, because of its geographic position, does not have that luxury.
The European Union should reorientate its Development Aid programmes to help middle income countries, like Greece, Turkey, Lebanon and Jordan, which are facing major refugee inflows, to cope with that huge burden.
Some EU countries, like Germany and Sweden, are hosting many refugees. But most are keeping their heads down and doing little or nothing.
There should be burden sharing, based on relative income and population. Countries that are receiving the largest proportionate number of refugees , should be getting direct ongoing cash help from those that are receiving the least.