COMPETITION IN THE WESTERN PACIFIC…..A THREAT TO WORLD PEACE? 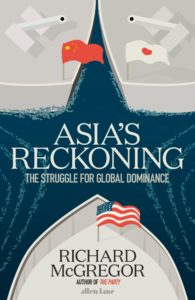 “Asia’s Reckoning, the Struggle for Global Dominance” by Richard McGregor certainly has an ambitious title.

It chronicles the growing competition in East Asia between China on one side, and the United States and Japan on the other. This competition has economic, military, and resource dimensions.

China aims to again become the dominant power in East Asia, a position which it had until about 200 years ago. Until then, other Asian countries acknowledged the preeminent position of the Chinese Emperor.  This history partly explains why China still has such  seemingly extravagant ideas about how far Chinese territorial waters extend.

Since 1945, through its network of alliances and military bases, the United States has held the position of dominant power in East Asia and in the western Pacific. But its hold is weakening, especially since both Trump and Clinton foolishly decided the United States should pull out of the Trans Pacific Partnership (TPP), which would have provided an economic and trade under pinning to the US military position.

The United States position needed the economic strengthening TPP would have given it, because of dramatic changes that have occurred in relative economic power since 1990.

Countries like Japan, South Korea, Taiwan and the Phillipines, depend on US military guarantees to defend their territorial integrity. Communist Vietnam has also moved closer to the United States for this reason. This worked well when US global dominance was visible for all to see, as it was in the wake of the first Gulf War. But subsequent US military reverses, in Iraq and Afghanistan, and isolationist rhetoric from President Trump has created new doubts.

While China has settled land based territorial disputes it had with its neighbours, highly emotional and unresolved issues remain with Japan, the Philipines, and Vietnam about uninhabited islands,  territorial waters, and exclusive air space. And, of course, China claims Taiwan.

Economic growth has enabled China to invest heavily in its military and naval strength.

China may not be seeking global dominance, as this book’s title suggests, but it is determined never again to be dominated by outside powers, as it was between the 1830’s and 1945. Memories of these past humiliations are fresh in China, and are reinforced by propaganda.

The opening by South Korea to North Korea around the winter games may well be an example of Chinese influence replacing the belligerence of Donald Trump.

As time goes by, the United States will find its dominance of the western Pacific harder to maintain, but this may not lead to military conflict.

Thanks to its one child policy, quite soon, China will become an elderly country. Japan is already elderly. Elderly countries are prone to be cautious.

On the other hand, as this book laboriously demonstrates, both China and Japan have become increasingly nationalistic. They have radically different understandings of history, and this shapes their sense of what is important, and of who they are. Accidents and miscalculations can lead to war, as happened in Europe in 1914.

This book gives a detailed account of the twists and turns on the triangular diplomatic relationships of the United States, China and Japan since 1951. Some of this is hard to follow.

It does not deal with economics at all, so the reasons for Japan’s decline are unexplored. Shifts in United States perceptions of Asia are also largely unexplained.

This book deals with an important topic, but it could be better.