THE BARD OF ERIN…..A MAN OF MANY PARTS 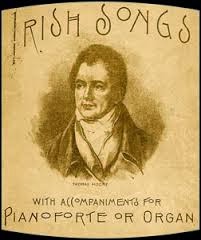 I remember, as a child, playing over and over again the 78 records, which had been the property of my late grand uncle and namesake, of John McCormack’s songs. Many of the songs in the great Irish tenor’s repertoire had been written over 100 years previously, by another Irishman, the poet and author, Thomas Moore. They were widely known as “Moore’s Melodies”.

I knew little or nothing else about Moore, although I remember I had a stamp, in my now long lost stamp collection, which had been issued in his honour in 1952. So it was with only mild interest, that I picked up a copy, of the biography of Moore by Ronan Kelly, first published in 2008 by Penguin in a Dublin bookshop. I am glad I did.

The Moore that emerges from these pages is much more than a mere sentimental and patriotic balladeer.

In fact, the melodies themselves were not Moore’s work at all, but had been collected by Edward Bunting from traditional local sources. But Moore composed the words to accompany, and give life, and meaning, to the melodies. From these compositions came his celebrity, and much of his badly needed income.

As well as the author of popular songs, Moore was a substantial poet, and friend of other poets, like Byron, Shelley, Rogers and Wordsworth. He was also an active political satirist, supporting the Whig party against the Tories.

He was a biographer and historian. He wrote biographies of Lord Byron, and of Richard Brinsley Sheridan. He was so close to Byron that Byron entrusted him with his own auto biography, a work that was destroyed, unpublished, after Byron’s untimely death, because of a dispute with some of other friends.

Moore wrote a substantial history of Ireland, and his poetry was accompanied by substantial explanatory footnotes that were the fruit of extensive historical research.

Moore was born in Aungier Street in Dublin in 1779, to a Catholic merchant family. His mother’s people, the Codds, were from Wexford, and the Moores were from  Kerry.

He was privately educated, and went to Trinity College, Dublin at the age of only 15. In order to pursue his literary career, he went to England after finishing college and never returned permanently to Ireland.

In England, his literary fame enabled him to become friends with many members of the Whig aristocracy, including Lord Lansdowne and the future Prime Minister, Lord John Russell. He was the recipient of political patronage from the Whigs, notably a sinecure in Bermuda adjudicating on the ownership captured cargoes.

Although he cultivated an English accent, and married a Protestant, he remained an active critic of British rule in Ireland, and supporter of Catholic Emancipation. He considered himself “English” when visiting America or France, but “Irish” when he was living in England.

Because Moore wrote so much, for publication and in private letters and diaries, Ronan Kelly’s book  presents a deep insight into the attitudes and lifestyle of a generation of Irish people who  experienced the  1798 rebellion, the Act of Union, and the struggle for Catholic Emancipation, but had yet to absorb the full horror and bitter political fruits of the Famine.