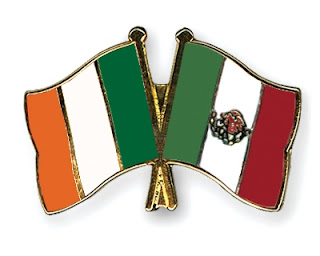 I spent last week in Mexico on a mission, in my capacity as President of IFSC Ireland, to promote closer economic links between Ireland and Mexico.
I  met the Governor of the Mexican Central Bank, Agustin Carstens, the Mayor of Mexico city, Miguel Angel Mancera, the Governor of the state of  Jalisco, Jorge Aristoteles Sandoval, the Governor of the State of Nayarit, Roberto Sandoval , the Mayor of Guadalajara, Ramiro Hernandez Garcia and a wide cross section of business interests .I also had the honour of addressing the Congress of the state of Jalisco and the city Council of  Zapopan, and of visiting the Mexican Stock Exchange.
Mexico suffered a grave financial crisis in 1994/5. There was a property bubble and a threat of a banking collapse, averted by an intervention by President Clinton. The crisis led to an 18% loss in Mexican  GDP.
Since then, Mexico undertook  substantial  structural reform, including passing a Fiscal Responsibility Law (similar to the Fiscal Compact recently adopted by the euro zone) seven years ago, which places constitutional limits  on deficits.
Thanks to all the measures taken, Mexico now
All this is heartening news for countries like Ireland, Portugal, Greece and Spain, who are also emerging from major financial crises. They can look at the example of Mexico’s recovery from financial crisis.
Mexico still has important challenges to overcome.
Mexico has benefitted from opening up  its market to competition and is looking forward to greater transatlantic  trade and investment  arising from the  recent announcements of Presidents Obama and Barroso. Export and investment oriented European countries, like Ireland,  need to look to opportunities  in countries like Mexico .