Category: life and death on the Italian Front 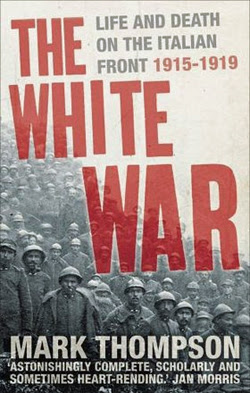 When one thinks of the First World War, the image that springs to mind is that of thousands of  soldiers being mown down by machine guns and heavy artillery in the mud of Northern France.
Little is written in English nowadays about the slaughter on the eastern front between Germany, Austria Hungary and Russia, or about the war in the Balkans ,when  the Serb army was crushed by the Central Powers.
Another dimension of the war that gets little attention is struggle between Italy and Hapsburg Austria .
This is the subject of an excellent book I have just read, entitled   ”The White War, life and death on the Italian Front ,  1915 to 1919“  by Mark Thompson.
Thompson shows that this was a thoroughly avoidable war.
Italy and Hapsburg Austria had actually been allies up to just before the outbreak of the war between then in 1915.  But the Italian nationalist intelligentsia had long wanted to expand their territory to what they  regarded as Italy’s  “natural” frontiers on the Alps, regardless of the fact that many of the people  living south of the Alps did not consider themselves to be Italian. They also believed the Adriatic sea should be under effective Italian control, as it had been in Venetian and Roman times.
In 1915, in order to keep Italy neutral, Hapsburg Austria offered Italy territory in South Tyrol and elsewhere.
But the Italians were not satisfied. In return for Italy joining the allied side instead, the Allies guaranteed that Italy would get all South Tyrol, Trieste, and a big slice of  coastal territory in what is now Slovenia and Croatia. Italian speakers were a minority in these areas.
Unfortunately for Italy, it was ill prepared for war. It suffered huge casualties,  attacking well defended Hapsburg positions on high ground all along the frontier. Wave after wave of conscripted and often illiterate Italian soldiers were sent to certain death in Hapsburg machine gunfire.
To the surprise of the Italian nationalists, the Hapsburgs army, although coming from a variety of ethnic groups, fought cohesively. The leading Hapsburg genera , Boroevic, was a Croat. Bosnian Muslims were among the fiercest fighters for the Hapsburg cause.
Although the Italians were comprehensively defeated in 1917 at Caporetto, and had to fall back far into their own territory, the eventual Allied victory did bring major gains to Italy.  But many of there had to be given up to Yugoslavia after the Second World War.
Mark Thompson tells this tragic human story very well. He illustrates the erroneous judgements, and extreme sacrifices, territorial nationalism can impose on those who fall under its spell.