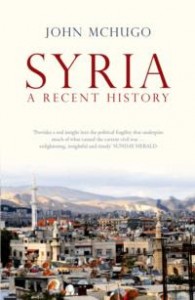 I have just finished reading “Syria, a recent history” by John McHugo, which was first published last year by Saqi Books.

The author is a senior fellow in the Centre for Syrian Studies in St Andrews University.

It shows that Syria is not a natural political unit on its own, but is part of a much wider Arabic speaking “Greater Syria”, which included the entire area from Gaza and all of Palestine, to the Turkish border, and from the Mediterranean as far as the Iranian border with Iraq. Uniting “Greater Syria” has been a longstanding theme of Arab politics

This book also reminds the reader of the long, and troubled, history of relations between Syria and France.

After the First World War, France was awarded a League of Nations responsibility to administer Syria, with a mandate to prepare it for full independence.

Britain was awarded a similar mandate for the area that is now occupied by Israel/Palestine, Jordan and Iraq. Both mandates covered an area that had hitherto been  part of the defeated Ottoman Empire.

Both Britain and France were rivals for regional influence, and both wanted to retain as much control as possible in their own hands.

France had to suppress a major revolt against it rule in Syria in the 1925 to 1927 period, and it used brutal tactics in that war. Even at the end of the Second World War, France still wanted to hang on the Syria, and was engaged in hostilities with Syrians seeking independence as late as May 1946.

This book described the complex post independence history of Syria right up to 2014.

Initially Syria had a parliamentary democracy of sorts, but this was gradually replaced by military regimes.

The parliamentary regime proved too weak to cope with the external threat posed by the rise of Israel.  The parliamentary regime was dominated by wealthy Sunni interests, who had traditionally exercised power in Syria.
After 1948, the Army was increased in size and strength. The army’s increasing involvement in politics brought new groups into power in Syria, but it weakened the army itself, because of factionalism and politically motivated purges. This weakness was exposed when Syria lost the Golan Heights to Israeli occupation when it was defeated in the 1967 War
That led, indirectly, to the takeover of the state by Hafez Al Assad, a former Army officer, of Alawite religion, who has been Minister for Defence in 1967.

He was a ruthless pragmatist and held power for 30 years.

He ensured that Syria performed better in the 1973 war, although it did not regain the Golan Heights.

His regime was a police state, although it did provide order, and it improved education and infrastructure in the country.

His regime was not a sectarian one, in the sense that it did not set out deliberately as a matter of policy to grant privileges to the Alawite minority at the expense of the Sunni majority. But patronage jobs in the public service have always been a way of building a power base in Syrian politics.

When Hafez al Assad died in 2000, he was succeeded by his son, Bashir.

The rebellion against the regime was sparked by a minor enough incident in March 2011, when some children were arrested and detained for writing anti regime graffiti on a  wall in a town near the Jordanian border.

The conflict with Israel contributed, from its beginning in the late 1940’s, to the militarisation of the Syrian regime.

This book does not provide any solutions to the current civil war, but it may help in the avoidance of mistakes. It gives a good sense of the deep complexity of Syrian politics and society.