THE IRISH TRAPPED IN FRANCE BY THE SECOND WORLD WAR.

I had a personal reason for wanting to read “No Way Out, the Irish in Wartime France 1939-1945” by Isadore Ryan (Mercier Press).

This is because my aunt, Hilda Delany (1916-1956) from Culmullen was one of the Irish trapped in France, when the German Army  quickly over ran, and occupied the country in the summer of 1940.

Hilda had joined the Bon Sauveur Order of nuns in 1938 and was sent to France for training.

She spent the entire war in France, only returning to her convent in Holyhead in Wales in September 1945.

She died when I was only 9 years of age, so I did not get to know her well, although I do remember my mother bringing me to visit her in Holyhead on the Mail Boat. Conditions seem to have been very difficult in occupied France and food was scarce, and these privations may have contributed to her death at such an early age.

While my aunt is not mentioned in Isadore Ryan’s thoroughly researched book, there are many stories of other individual Irish individual people (including nuns), who found themselves trapped in France with minimal means of communication with, or receipt of support from, their families or communities back in Ireland.

The Irish Legation in Vichy France did its best to provide support but there were limits on what it could do. There were advantages in having a neutral Irish, rather than a British, passport at this time. The British passport holders were liable to be interned, whereas the Irish enjoyed some internal freedom of movement.

But the only way the Irish could get home to Ireland was by land to Spain and then by air or sea from Portugal to Britain. This was expensive, slow, and hazardous so very few attempted it.

Isadore Ryan ‘s book provides glimpses into the lives of many of the Irish, some of them well known like James Joyce and Samuel Beckett. He also describes the lives and troubles of others who were priests, businessman, teachers of English, governesses, entertainers and nurses.

Some, like Beckett and Janie McCarthy were active in the French Resistance. A small number fraternized with the Germans, to the extent that they were suspected of collaboration with them.

Interestingly, very few returned to Ireland when the war was over, a sign of straitened condition of this country in the late 1940’s and early 1950’s.

Many Irish readers will find mention of families they know in this book.

It gives a glimpse into a more difficult time, which will put in proper proportion some of the constraints now imposed by the battle against Covid 19.

DARKNESS IN THE CITY OF LIGHT…PARIS UNDER OCCUPATION 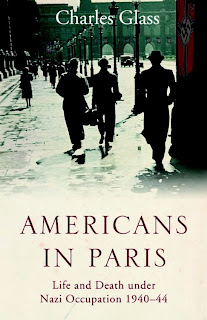 I really enjoyed reading Charles Glass’ book “American in Paris, Life and death under Nazi Occupation 1940-1944”(published by Harper Press).
This is a story about a small group of unusual people, who found themselves in profoundly unusual circumstances. Yet it offers real insights into ordinary human nature, into how some people will optimistically collaborate with power, while others will resolutely resist, and how it is not always easy to predict in advance who will take which course.
When France was first over run by the Germans in June 1940, the United States was still a neutral country and many Americans, who had put down roots in France ,felt under no particular pressure to leave. Some were married into French families and other had business interests in Paris. In fact, American citizens initially enjoyed a relatively privileged existence. The German authorities wanted the US to stay out of the war, and treating Americans in France well made sense for them.
In contrast, British, Canadians and other whose countries were at war with Germany since September 1939 were under severe restrictions and many were interned in camps at Compiegne and Vittel.
That changed when America entered the war against Germany in December 1941, but, even then, the French Government at Vichy, which had signed an armistice with the Germans in June 1940 and  administered some of the country, was not at war with the US, and the US continued to have an Embassy at Vichy
Some American citizens had fairly close links with the Government at Vichy. One American citizen, Rene de Chambrun, was married to the daughter of Pierre Laval, the Vichy Prime Minister.
Another, Charles Bedaux, provided premises for the American Embassy after the French Government had fled Paris, but also enjoyed close business and social links with figures in the Vichy regime and had business contacts with the Germans. Others, like Dr Sumner Jackson of the American hospital in Paris, took the Allied side even before the US entered the war, and helped the French Resistance in many ways under occupation. Yet others, like the bookseller Sylvia Beach, first publisher of some of James Joyce’s work, kept their heads down and tried to survive.
This book brings out the many difficulties of ordinary life under occupation….the endless compromises, the lies, the black market, rationing, and the scramble for food.
City dwellers in France, in 1943/4, were almost starving.  The food needs of German forces got priority.
My own aunt, Hilda Delany, was a young nun in occupied France during the war, and it is widely believed in our family that she never recovered from her privations, and that this accounted for her death at an early age in the 1950’s.