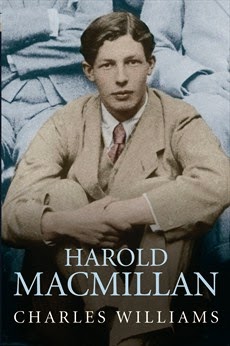 I greatly enjoyed reading “Harold Macmillan” by Charles Williams, published by Phoenix books. The author is a Labour member of the House of Lords so he is under no pressure of party loyalty to be unduly kind to this Conservative politician.
Macmillan was Prime Minister of the UK from January 1957 to October 1963. Those who remember him at all these days will probably think of him as the man who was Prime Minister, when the Profumo scandal broke over the supposed intelligence risk of Defence Secretary Profumo’s affair with Christine Keeler , who was also sharing her favours with a Russian military attaché. No security breach was found, but Profumo had to go, because he initially denied the affair in the House of Commons.
This affair was a small part of Macmillan’s life, and takes up little space in a very entertaining book.
Macmillan came from a background in publishing and his mother was American. In his youth, he was considered dull and pompous.  After service in the First World War, he married a daughter of the Duke of Devonshire, a big step up in the class conscious British society of the 1920’s.
As a member of the House of Commons in the 1930’s, he was on the left of the Conservative Party, and favoured economic planning and Keynesian economics. He was close to Churchill.
Around this time, his aristocratic wife started a long running semi public affair with another MP, and close friend of Macmillan, Bob Boothby. She wanted a divorce but Macmillan, with the support of both his mother and mother in law, refused.
His distant relationship with his wife was probably no harm when, in 1943 and already a junior Minister in Churchill’s coalition, he had to leave home on his own to act as representative for British interests in North Africa.
Here he had to work between General Eisenhower, whose American forces had ousted the Vichy forces and were about to eject the Germans, and the various French factions in North Africa. At this time, de Gaulle was not in undisputed charge, and the Americans did not like him at all. Macmillan’s diplomatic skills grew as did his self confidence as he resolved some these problems.
When the Conservatives came back to power, he became Minister for Housing, and later Foreign Secretary in 1955. As such he was involved in the planned Anglo French occupation of the Suez canal in covert collusion with the Israelis. This disaster angered the Americans and also led to a deterioration of relations with France. It led to the psychological collapse of Anthony Eden as Prime Minster, and his replacement by Macmillan.
The book deals with the British reaction to the moves, started in Messina in 1955, to form” an ever closer union” of the states of Europe. This eventually became the EU of today. From the outset this was a political as well as an economic project.
Britain stayed away from the meeting in Messina and thus played no part in shaping the agenda in ways that might have suited Britain’s interests and its worldwide trading relationships. This was the fault of Foreign Secretary Macmillan, and of then Prime Minister, Anthony Eden.  A Minister of state in the Foreign office, Anthony Nutting, had begged them to send a representative. To Britain’s cost to this day, they ignored him.
Afterwards, Macmillan tried to forge a rival European bloc, a free trade area without political content, and tried to negotiate a deal between it and the EU.  When that did not work out he was eventually forced, as Prime Minister, to apply for UK membership of the EU.
Thus was forged the British reflex of trying to influence the EU, but as a semi outsider, not fully committed to the success of the project. Trying to place an each way bet.
This tied up with defence, where France wanted its own independent nuclear deterrent and Britain wanted one too, but found itself deeply dependent on the Americans. In his attempt to get his way, Macmillan event threatened to withdraw British force from the continent.  De Gaulle’s eventual rejection of the UK’s first application to join the EU derived from a fear that the British would in some way “Americanise” and globalise the EU, in a way that would dilute it, and deprive it of its purpose of reconciling the nations of the continent.
This is a good biography and draws on Macmillan’s own diaries for much of the personal colour, including the books he read to relieve the tension of a busy political life (Trollope and Walter Scott top the list)