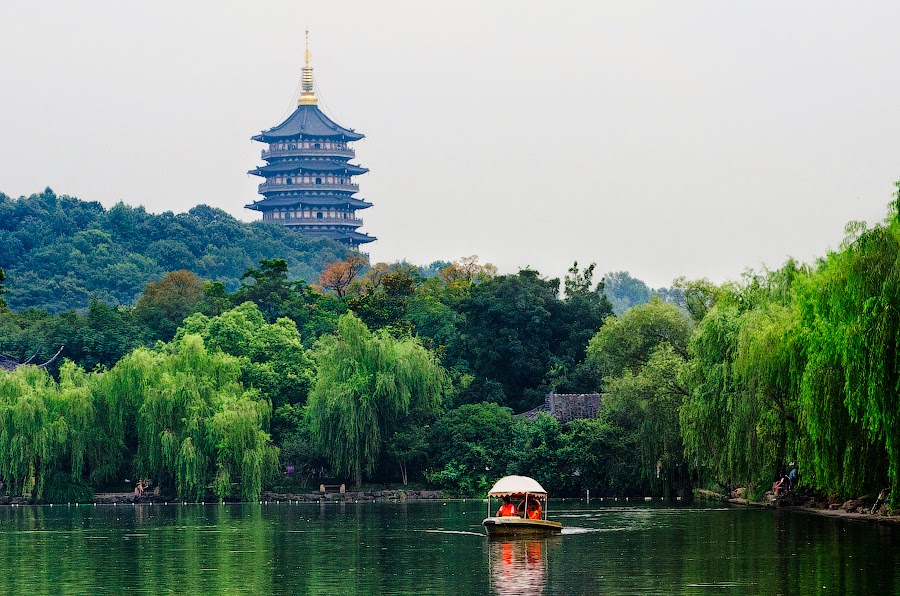 I  have been in Hangzhou in the past week attending a Global Investment Conference organised by Euromoney. Hangzhou was for a time the capital of China and the biggest city in the world. It is about 200 km from Shanghai, or an hour’s journey on the high speed train, a trip that I was told costs only 10 euros.

Hangzhou was a centre of the silk business and was visited by Marco Polo. Silk from Hangzhou went along the ancient Silk Road all the way to Europe, thereby making Hangzhou one of world’s first globalised economies.
I spoke in Hangzhou just as the Asia Europe Economic Meeting (ASEM) of heads of Government was taking place in Milan. As the President of the European Council, I attended the first ever ASEM meeting  in Bangkok in 1996. I met the Mayor  of Hangzhou and key commercial and political figures.
Since 2010 there has been a huge surge in outward investment from China in the rest of the world, jumping from 6.1 billion euros to 27 billion euros in just three years. This investment is going into  buying high tech companies, companies with globally known brands, and tourist resorts (like Fota in Cork). Just as China’s export drive enabled it, not only to gain income but also to gain market knowledge, this wave of investment is also designed to strengthen China’s global competitiveness and sophistication.
Children in the Shanghai are getting the highest test results in Maths, Science and Reading comprehension in the global PISA tests, which shows that they will provide strong competition for European and Irish children in the global economy. Irish Universities are accepting Chinese students and also investing in developing University facilities in China. This will help China to become a high income economy, its people enjoying lifestyles that will make similarly exorbitant demands on global resources, to the ones already being made by  European and American lifestyles consumers.
Wage levels are rising fast in China, as demand for workers is beginning to exceed supply, partly thanks to the one child policy.  China is losing low cost jobs to Vietnam and Mexico, so it has no choice but move higher up the value chain.
There is a shift in the allocation of credit away from big, relatively inefficient, state owned heavy(and often polluting) industries, towards privately owned businesses in the consumer goods sector. While the raw GDP growth rates in China may decline as a result, the life style enhancing quality of future GDP will improve.
China is becoming a middle class country, with middle class tastes and material aspirations. With wealth has come anxiety, with many Chinese wanting to invest some of their savings overseas. This provides opportunities for the Irish international financial services industry.
While I was in Hangzhou, the protests in Hong Kong were still under way. The protesters wanted anybody to be eligible for election, not just candidates approved by a single nomination committee. I read an article on this controversy in the “China Daily”, by an Indian Professor, M D Nalapat,  entitled  “Hong Kong must avoid the democracy trap”, which challenged the notion that, at every level of economic development, democracy is a guarantor of economic success.
He said
“Political chaos can act as a speed breaker for rising Asian economies, dampening the challenge they pose to western counties. Iraq, Egypt, Libya and Ukraine are examples of countries where hundreds of thousands of youths believed that replacing of existing structures through street protest would result in a better life. Instead what they have got are deteriorating living standards and  increasing insecurity.”
This is unfortunately a fair comment, and demonstrates the danger of making exaggerated claims of automatic economic advantages from any change of governmental system. Democracy requires patience and self restraint, sometimes absent in recently liberated societies.
Professor Nalapat went on
“Hong Kong is still moving upward, when the present generation in the US and the EU are worse off than the generations preceding it”

This  is a  superficial comment. Mature economies will never have, or need to have, the same rates of economic growth as economies, like China, which are in the “catch up” phase. Indeed, there is a case to be made that, beyond a certain level of economic development, diminishing returns in human wellbeing and environmental quality set in. 5% plus annual growth rates cannot continue to infinity…..anywhere in the world.
It is not surprising that an article like Professor Nalapats’ should appear in the “China Daily”, but is troubling that it should be written by an Indian, an inhabitant of the world’s largest democracy, a country in which there are 3 million freely elected  legislators at differing levels of government, with real competition between parties unlike the tightly controlled system obtaining in China.
But Professor Nalapat is showing that people in the developing world are watching European and North American democracies, as we squabble about how to restore dynamism and optimism in the wake of the 2008 economic crisis, and are drawing conclusions about our systems of government, and the capacity of those systems to enable us to get our economic act together, and democratically to reconcile citizens expectations with economic realities.