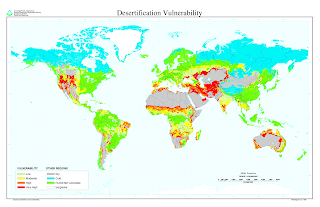 I am going to China this week to take part in a conference in Ordos, in Inner Mongolia, on desertification.  Desertification happens when land, that was previously capable of supporting life, is turned into infertile sand.  This   is a problem in all  the continents of the world, except Antarctica.
Deserts , worldwide,   expand by about 50.000 square kilometres  per  year, and desertification threatens the livelihoods of a billion people in  110 countries.  In Europe, Spain is particularly affected.
Desertification is a particular problem in China.
During the 1990s, the Gobi desert grew by an area equivalent to  half the size of Pennsylvania.  The immediate cause is wind eroding a soil that has become so dry that it is prone to be blown away.   Sandstorms from Northern China reach as far as Korea and Japan.  Ironically, flooding can also lead to desertification by loosening soil.
One Chinese study suggests that soil becomes prone to erosion for the following reasons
The pressure of providing food and fuel for an increasing population can lead people to overuse land in a way that eventually leads to the  destruction of its fertility.
The solution is to be found by
Curbing bad practices and initiating good practices requires effective political organisation.  In the past ten years, China has begun to  reverse the process  of  desertification.
The world population is now 7 billion and will eventually reach 9 billion. We cannot afford to lose fertile food producing land if we are to avoid famine.

We have also got to conserve water, because water demand is increasing rapidly. Urban societies consume more water than rural ones.  Meat production requires much more water than grain production, but as people get richer they  eat more meat.