In Antoin E. Murphy, Donal Donovan, Ireland, The fall of the Celtic Tiger 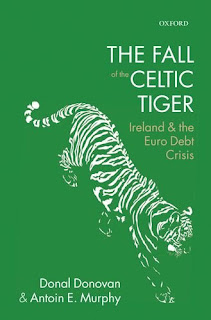 This is the title of a recently published book by Donal Donovan and Antoin Murphy, which  should be required reading for anyone who wants to understand how an economic boom can destroy a country.(It is published by  Oxford University Press)
Thanks to cheap credit, and rapidly rising property prices, Ireland experienced a property bubble between 2000 and 2007. This bubble led to such a radical distortion of its economic structures, and to such an increase in debt, that full recovery will take 20 years.
The distortion took the form of a doubling in the size of the construction sector, large and uncompetitive pay increases across the economy, and rapid increases in numbers of people employed in the public sector.
In just five years from 2001 to 2006, the numbers employed in the health sector grew by 20,000 or 25% .By  2009, Nurses salaries in Ireland were the third highest in the OECD and  Ireland spent more on pharmaceuticals per person  than any OECD country, except the US, Canada and Greece.
The share of the workforce in the public sector reached 29%,  as against 19% in Germany.  The numbers in top grade positions in the civil service grew by 86% between 2000 and 2006.
Rates of Social welfare benefits, paid   to those unable to work because of illness, age or unemployment, grew by 67% in real terms. While public sector pay rates have since been reduced substantially, these benefits have not been.
Bubbles misallocate human capital. Instead of choosing careers and skills, for which there is enduring global demand, talented people were drawn by quick rewards into activities for which demand is inherently temporary, like construction.
Vital educational and training opportunities were lost. A generation of young people were misled.
House prices had already risen by 133% between 1994 and 2000. These increases were justified by rapid economic growth, immigration and new family formation, all of which created a  genuine demand for housing. The trouble is that the increase in house prices continued on after 2000, and was  financed by excessive lending, which created an expectation that the only way house prices could ever go, was up.
For example, mortgage lending by Allied Irish Banks increased by 139% between 2003 and 2008. Meanwhile, on top of this, AIB lending  to developers to buy land, on which future houses might be built, increased  by 332%!
The assumption seemed to be that demand for housing could go on growing to infinity.
The revenue of the Government became unhealthily dependent on  property sales  such as  stamp duty, capital gains tax, and VAT on house sales. Property related revenues reached  18% of all revenues in 2006, whereas they were only been 8% in 2002.
But once house sales stopped, the revenue stopped too, leaving a huge hole in the Government’s budget. The revenue could disappear overnight, but the increased in spending could only be reversed  over many years.
How could mistakes like this be made?
This question is very thoroughly analysed in this  book.
The authors identify two tendencies of Irish policy making, whether in the public or private sector,  that were fatal

1.  “Silo tendencies” within institutions, where people only think about their own immediate responsibilities, and do not question wider assumptions.

2. A “consensus approach” which encourages a single view to be taken of any issue.

At a wider level in Europe, and in the Central Banks, there was an underlying assumption that markets were so efficient, and participants in them  sufficiently wise,  that prices would always find their own level, without a crash.
This was backed up by academic work by economists like the Nobel laureate, Robert Lucas, who argued that a technical solution had been found to  depressions. The ECB Financial Stability reports did not question the consensus, nor did the IMF.
This book deals thoroughly with the mistaken belief that the whole problem was due to the Government giving a blanket guarantee to the banks on 29 September 2008.
It concludes that, while the guarantee proved to be very expensive, the alternative to giving it at that late stage would have been much worse.
A sudden collapse of the Irish banking system, and a chaotic collapse in the economy and in international confidence in the country, would have been a probable consequence of declining to give the guarantee then.

The really blame worthy mistakes were made between 2000 and 2006, when  huge and unsustainable increases in bank lending, and government spending, were allowed to take place.