In “The Pursuit of Italy, a history of its land, and peoples”, David Gilmour, Italy, regions 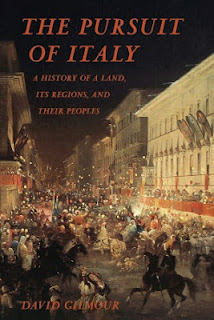 I enjoyed reading “The Pursuit of Italy, a history of its land, regions, and peoples” by David Gilmour , published by Penguin in 2011.
David Gilmour is an historian with a point of view, and the title gives his point of view away. He has doubts about whether Italy should ever have been united as one country, because it is so diverse in geography, history, language and ethnicity.
He quotes a statistic t that ,when Italy was united in  1861, only 2.5% of its inhabitants spoke  present day Italian(which is the original language of Tuscany).
Italians ,though grouped in a series of small states, had been the richest people in Europe from the early Middle Ages to the end of the sixteenth century. In the years after unification in 1861 it was one of the poorest, and remained so almost until the mid twentieth century.
He particularly regrets the demise of the Republic of Venice, which had lasted over 1000 years, but which was  dissolved and handed over to Austria by Napoleon.
The rule of Italy by a series of independent states was not regressive.
Tuscany was the first state in Europe to abolish the death penalty. Gilmour argues that the legal system on Naples and Sicily was more tolerant than the Piedmontese system that was imposed, after the Neapolitan Bourbon King of Naples and Sicily had been dethroned by Garibaldi,  and a union with the rest of Italy put through in a  dubious referendum.
The central challenge facing the liberal elite that became the governors of united Italy after 1861 was to forge the diverse people of the peninsula in a single united people. Waging war was their chosen method.
Harsh colonial campaigns were waged in Eritrea and Libya.  Italy went to war against Austria in  1915, even though Austria was willing to concede all its demands. Mussolini repeated the mistake in 1940.
Whereas the prevailing ideology of Italy from 1861 to 1945 was aggressively nationalistic, the prevailing ideology,from 1945 until very recently, has been anti nationalistic, and European in orientation.
But not everything in post war Italy was perfect. Extravagance became a feature of public life. Italy now has the best paid parliamentarians in Europe.
This book helps a reader to understand some of the challenges facing Italy today as it seeks to get its people to support the measures necessary control its huge public debt.