THE LITTLE KNOWN WOMAN WHO RULED CHINA FOR OVER FORTY YEARS 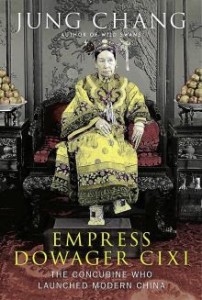 I immensely enjoyed reading “Empress Dowager Cixi” by Jung Chang, published by Vintage Books in 2014.
It tells the story of a well read young girl, named Cixi, from the Manchu aristocracy, who was selected to be one of the concubines of the Chinese Emperor.  In 1861, the Emperor died young, without a male heir by his wife. Cixi ,had, however, borne him an infant  son, and this son  became Emperor
Power was to be exercised on his behalf by Regents.
But, with the surprising connivance of the legitimate wife of the late Emperor,  the  infant Emperor’s mother, Cixi succeeded in dismissing the Regents,  and, along with the old Emperor’s widow, the exercised full power on her sons behalf.
In 1875, her son, the Emperor, died,  not long after he reached maturity. Cixi  then managed to have another infant, a nephew of hers, named as Emperor.
Cixi thus continued to be the real power in the Chinese Empire, until her death in 1908.
She  opened China up to modern ideas in public administration, transport and education. She wanted to learn from the West, so that China would not be dominated by the West.
But Japan had been modernised twenty years earlier than China, and had developed a far stronger army and navy. Japan wanted to control China, or at least the Chinese market. When it did not get its way, Japan defeated China in a war over Korea in 1894.  As a result , Japan obtained huge reparations, which further weakened China economically and politically..
Other powers then made  demands on China, which, in 1900, provoked a popular, anti foreigner, uprising known as the Boxer rebellion.
Cixi sympathised with the Boxers, and was forced to flee Beijing when her capital  was taken by foreign troops from a number of nations, including Britain, Germany and Japan, who had intervened to suppress the Boxers.
The foreign troops  could not , however,  fully  control China without the legitimation of a native Chinese government.  Cixi was thus able to return to power in Beijing after the foreign troops had left.
At this stage, having learned the lesson of the failure of the Boxer revolt,  she set out to prepare dramatic reforms of China, including an elected parliament and turning the Empire into a constitutional monarchy. The laws for this were passes, but Cixi  died before these could be brought into effect.
A few years after her death,   the Empire itself was replaced by  a Republic . This Republic survived, but not as a democracy as Cixi had  envisaged, until 1949.
This book is a dramatic story on intrigue, tragedy and extreme ruthlessness. The character of Cixi, and of her advisors and opponents, is drawn out very skilfully.  So also is  self satisfied and inefficient  social structure of mid nineteenth century China, which Cixi did so much to change, long before China became a republic in 1911.
Cixi’s role has been downplayed  by both the Nationalist and the Communist Chinese  leaders, because both want to claim the full credit for the modernisations she had, in fact, initiated.
Above all  this book is the story of how an intelligent  a woman was able to exercise immense power, in what appeared, on the surface, to be a completely male dominated society.
It is also the story of the humiliations suffered by the people of an ancient nation at the hands of foreigners, and explains why China today, is so determined to equip itself to resist unwanted external interference.