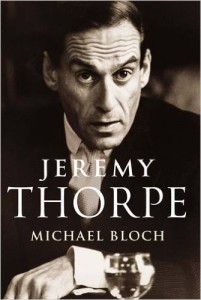 I recently read a biography of the former leader of the British Liberal Party, Jeremy Thorpe, written by Michael Bloch and first published in 2014.

Thorpe was an old Etonian and a member of a circle of friends who were used to having enormous influence in the political, legal, and economic destiny of Britain. He was a barrister.

The Thorp family were originally from Wexford, where they had settled as part of the Cromwellian conquest of Ireland.

His great grandfather, William, joined the Dublin Metropolitan Police in 1856, as a constable. He rose through the ranks to become a Superintendant by the time of his retirement in 1890.

One of the clergyman’s sons, Jeremy’s father,  John Henry Thorpe, became (briefly) a Tory MP in 1919, before Jeremy was born.

Jeremy’s parents were close friends of the Lloyd George family, and it was through that connection that Jeremy, who always saw himself as a future Prime Minister, gravitated towards the Liberal Party and a political career.

He became involved with the Liberals at a time when the Party was in a very weak condition, where all but one of the seats  were held, only because the Conservatives did not contest the constituency at all, and allowed the Liberal MP a free run against Labour.

Jeremy was a flamboyant campaigner and had a knack for attracting publicity. He employed this to good effect put the Liberal Party back on the political map. He won several by elections.

He came close to power when Edward Heath contemplated coalition with Liberals, led by Thorpe, as a way of staying on a Prime Minister after an Election in which the Conservatives had lost seats.

Thorpe, although a married man, was apparently being blackmailed, through a good part of his political career, by a former homosexual lover. This was at a time when homosexual acts were illegal. He was later accused of conspiring with others to have his blackmailer murdered.

He was acquitted but never recovered politically from this scandal, which provides the most interesting material in this biography of an otherwise shallow and insubstantial political figure. 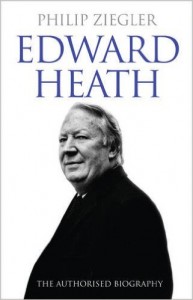 “Edward Heath, the authorised biography” by Philip Ziegler was published by  Harper Press in  2011, but it is even more relevant today, as the UK contemplates whether it should undo the major work of Ted Heath’s career, that of bringing the UK into membership of the European Common Market, now the European Union.

I only met Ted Heath once, in 1997 in the European Parliament, when we both received the Schumann Medal from the European People’s Party.  In my case, it was in recognition of the success of the Irish EU Presidency of 1996.

In his case, it was for something much more significant, and more difficult, reversing the post war isolation of the UK from the task of building an economic base for a peaceful Europe.

In fact Ted Heath had made his maiden speech in the House of Commons in 1950 in the Schuman Plan for unifying Europe’s Coal and Steel industries, in which the then UK Labour Government had refused to take part. He wanted the UK to take part.

I was delighted to meet him, as I had long admired him, not only because of his stance on Europe, but for his pragmatic and non ideological approach to politics.

As Prime Minister, while he favoured competition and trade union law reform, Ted Heath attempted to reach understandings on incomes policy with trades unions and employers, an approach that was reversed by his successor Margaret Thatcher.

She relied on reducing the money supply to bring down inflation, while he hoped it could be achieved by agreement. Her policy worked, but the social cost was high. His policy did not work because some key Unions, notably the miners, refused to cooperate, and the TUC was unable or unwilling to get them to change their minds.

Unlike Margaret Thatcher and all his other successors as Prime Minister, Ted Heath had served as a soldier in World War Two. This direct experience of war, and a pre war visit to Nazi Germany, led him to put great emphasis on the need for Britain to positively contribute to the building of a structure of peace in Europe, as a participant not just as a bystander.

This biography reveals that, when in 1970 he eventually succeeded in overcoming the French veto on UK membership of the Common Market, Heath expected to be pressed to join the proposed common currency as soon as it could be set up. He was for the idea himself, but felt it would not be popular in the UK. By the time the UK eventually joined in 1973, the volatility caused by the oil crisis and the fragility of sterling would have precluded the UK from joining the single currency, if it had in fact been launched then.

This biography explores Ted Heath’s difficult and solitary personality. While he had some very close friends, he never married, and was not gregarious.

He never accepted his ejection from the Conservative Party leadership and this meant that he never regained much positive political influence, despite remaining in the House of Commons until he was 80 years of age.

AN INTERESTING CRITIQUE….BUT HOW VIABLE IS THE ALTERNATIVE? 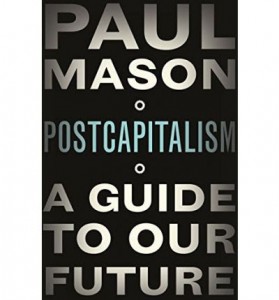 Paul Mason, the economics editor of Channel  4 News, has written “Post Capitalism , a guide to our future “, which  offers a critique of the existing global capitalist system.

He points out that capitalism is only 200 years old and has gone through many changes. Economic systems do not last forever and can sometimes collapse suddenly and painfully.

In its present phase, global capitalism is, he says, “driven by network technology, mobile communications, a truly global marketplace and information goods”. He says this model is now stalling.
He argues that many of the innovations now emerging are ones that derive from discoveries that produce services that are(or should be) intrinsically free, in the sense that, once invented, they can be reproduced indefinitely, almost without  extra cost.

New software applications, and new pharmaceuticals are, for example,  profitable only so long as they are protected by patent or copyright exclusivity. That is a fragile enough protection, it  is arbitrary, and is dependent on a continuing global consensus.

As their societies age, he also believes the debts of many developed country governments are un payable, without drastic cutbacks in services to the elderly. Debt default by a major country could blow the whole global financial system apart.

He argues that the capitalist system has only kept itself going, by bringing into the for profit sector, services that previously were provided free, like childcare and care for the elderly. Rapid urbanisation has made family care, outside the market, impractical for many thus creating new” for profit” markets in care services of all kinds

Meanwhile the market is incapable of finding solutions to global threats like climate change. There are so many players. With contradictory interests, that no one is in charge, and capable of imposing a solution.

Inequality in incomes and wealth are reaching what he regards as unsustainable levels. This is driven by technological change. Work that requires only a high school level of education is harder and harder to find.

Education is becoming as much a means of sorting out job applicants as it is a method of releasing a student’s potential.

Those who control technology and finance, and have key skills, qualifications, and intellectual property, are commanding an undue share of the flow of wealth. States are too weak to curb this activity.

His solutions are not as well worked out as his critique.

He wants everyone paid a basic income by the state, whether they work or not (notwithstanding the fact that admits that the same states are already horrendously in debt).

He wants the state to intervene to promote the provision of more goods and services for free, like the free service provided by Wikipedia. He also wants the state to use the criminal law to penalise rent seeking behaviour in business and to strengthen the role of trade unions.

Given that that people and businesses, who want to avoid doing what one country wants them to do, can easily move to another country, his model could not be implemented without reintroducing capital controls, and reversing the benefits of globalisation.

Most of his proffered solutions are thus impracticable for one country, acting on its own. They would require some form of, self sufficient, global government and the author offers no clue as to how that might be achieved.

He wants the un payable debts of states to be gradually reduced through inflation, which he accurately describes as financial repression.

He believes this financial repression should be engineered by the central banks.  This would destroy people’s savings, pensions, and insurance policies, which are underwritten by the very debts he wants to write off or devalue. As he puts it, his policy would “reduce the value of assets in pension funds, and thus of the material wealth of the middle classes and the old”.

People would never vote for solutions along those lines, and nothing in this book will persuade them to do so. The only way they could be introduced would be by stealth.

The book is useful in that it offers an insight into the logical outcome of the policies espoused by left wing anti capitalist protest parties.

It also portrays the risks that lie ahead for the world, if the defects in the present system, which the author correctly identifies, are not tackled properly.