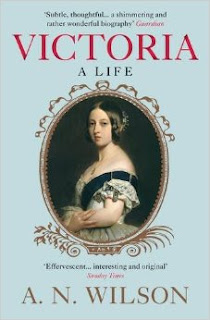 I  had not really expected to, but I greatly enjoyed reading the above titled biography of Queen Victoria, by A.N. Wilson, which was published last year.
Early in her reign, Victoria was much influenced by her highly intelligent German husband, Prince Albert. As well as being an energetic promoter of public works of all kinds, Albert had definite ideas about foreign policy. He wanted to use marriages between members of European royal families as a means of building a structure of peace and interdependency in Europe.  In his view, Royal marriages ought to serve the same purpose that economic integration serves in the EU today.  Thus his and Victoria’s children were married into the Prussian, Danish and Russian royal families. The focus of attention in Albert’s time was on Europe.
After 1861 the focus changed. When Albert died in 1861, Victoria went into a long and self indulgent period of reclusive mourning. When she emerged from this she came under the influence of Benjamin Disraeli, her Conservative Prime Minister.
Disraeli needed to come up with a project that would enable his party to win votes among the newly enfranchised working class . His project was the elevation of Imperialism to the status of a national and party ideal, and his means was the conferral on the Queen of the title “Empress of India”. She was delighted and became an ardent Tory.
The grandeur of this title, and the aspirations it entailed, appealed to the Queen, but also to the mass electorate that the Conservative Party wanted to win.
Winston Churchill was a Conservative in this tradition, and one can even discern echoes of Imperial nostalgia in the anti European sentiment in the Tory party today. If one has given one’s heart to an ideal of “Empire”, how can one settle into a mundane existence as  just one of 28 countries in a European Union?!
This book is also the story of a family, with all its foibles and tragedies.  Victoria’s relationship with her son and heir was very bad. She got on well with all her Prime Ministers, except Gladstone, who she disliked greatly.
She was a prolific writer. A lot of her correspondence and diaries were edited, or destroyed, by her family after her death.  So the exact nature of her relationship with her Scottish manservant, John Brown, is not determinable. But she did ask to be buried wearing his mother’s ring, which he had given her.