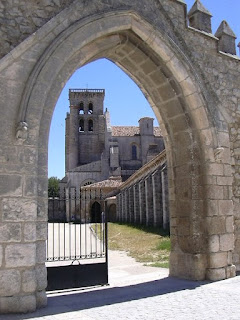 This week I had the chance to visit Burgos for the first time. I had always wanted to visit this beautiful city, and I was certainly not disappointed by what I found.

I came to Spain to speak at a meeting in Madrid organised by the Centre for European Studies, and to address at a conference entitled “Transforming the crisis into an opportunity” organised by the Burgos Forum for Business and Enterprise in Burgos .

At the Madrid conference I shared the platform with Jose Maria Aznar , who has been a good friend of mine since before we were Prime Ministers of our countries. The former Finance Minister of Romania , Daniel Daianu also spoke at another session of the conference.

Spain, like Ireland, faces a big problem because it devoted too much of its resources to building and buying house property. House construction has always been a volatile sector of the economy and in the past five years Spain built 2.8 million new houses, but has only been able to sell 1.5 million of them so far. Its banks also extended credit for the purchase of development land for the building of even more houses, and that land is now worth only a fraction of what was paid for it .This is exactly the problem in Ireland too.

The lesson I would draw from this is that it is not enough for the government authorities like the Central Bank to ensure that the banks have enough capital and do not use risky financial instruments, which the Bank of Spain did much better than most central banks did, but they should also monitor what money is being lent for to ensure that it is spread over a variety of sectors, and not concentrated in a single volatile sector like property development.

I also told my audience in Burgos that I am very troubled to see the German Constitutional Court being brought in to arbitrate on whether Germany should, as part of the stabilization plan for the eurozone, be allowed to lend money at a 5% rate of interest to Greece. This is a loan, not a subsidy and ,and the Judges of one country are not the people who should be deciding economic policy for the European Union, especially when the people who are elected to make European economic policy are struggling with an unprecedented crisis.

I had the chance to spend several hours touring Burgos on foot. The Cathedral is truly magnificent. It was built in the 14th century but some of the highly detailed sculptural work looks as if it was only completed yesterday. The art work in the Cathedral shows Flemish as well as Spanish influences, as well as Muslim and Jewish inspiration. One of the Bishops who contributed most to the internal decoration had converted to Catholicism from Judaism. Many of the artists were Muslim Spaniards.

I also visited the monastery of Santa Maria where the museum contains clothing actually worn by the King and Queen of Castille in the 13th century.

I strongly advise a visit to Burgos, especially at this time of the year.

Christian churches of Europe, and the European Union

A longer than expected visit to Madrid.