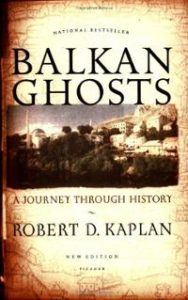 While all eyes are on the looming conflict between the United States and North Korea, it is worth remembering that sources of conflict are still to be found in Europe, notably in the Balkans.

Mercifully these do not involve the possible use of nuclear weapons, but have the potential to take many lives, as did the war that followed the breakup of Yugoslavia.

I have just finished reading “Balkan Ghosts, a journey through history” by Robert D Kaplan.  Kaplan, an American, spent many years of his life in the Balkan peninsula, including Greece.

This book is a look at the roots of the many and varied conflicts in the Balkans, through the eyes of some of the vivid personalities Kaplan met in his travels through Croatia, Serbia,  Macedonia, Albania, Romania, Bulgaria and Greece in the 1970’s and 1980’s.

In the last few days, I met some politicians from the former Yugoslavia, and was struck by how concerned they are at the possibility of military conflict in one the countries on the list, Macedonia.

Macedonia is a country shared between a Slav majority and an Albanian minority.

They had an ethnic civil war in the early 1990’s, but were able to put together a power sharing administration after the war, which was something of a miracle.

The two communities are divided by religion and by language.

Their neighbours are not much help to them. Bulgaria originally claimed the country as part of Bulgaria and fought a war to achieve that goal in the early years of the 20th century. Some Albanians feel part of Macedonia should be part of a greater Albania, and Greece vetoed Macedonia’s membership of NATO, simply because the country calls itself Macedonia.

Kaplan’s book explores Croatia’s troubled history in World War Two and the case of Cardinal Stepinac.  Stepinac was accused of collaboration with the Nazis but  his record seems to me to have been a lot better than that of most German bishops at the time.

He chronicles the decline of the Romanian monarchy under the playboy King Carol II, and the subsequent Iron Guard and Communist regimes. He visited Transylvania(part of Romania) where German, Hungarian, and Romanian speaking communities uneasily co existed.

He writes about the appalling treatment meted out to their Turkish speaking minority by the Bulgarian Communist regime, revenge perhaps for Turkish atrocities against Bulgarians a century earlier.

Finally he deals with the extravagances of the Greek Prime Minister, Andreas Papandreou, in the 1980’s and 1990’s.  He sees Greek politics as an expression of its Byzantine and Balkan heritage rather than as a reflection of the supposed glories of ancient Greece. Many of the policies that made the Greek state financially unviable in 2008, were introduced by Andreas Papandreou twenty years earlier.

All of this history is brought alive through the personal stories of individuals in each of the countries, which adds colour and human interest to what would otherwise be a depressing tale of nationalist over reach, religious bigotry, and avoidable conflict.