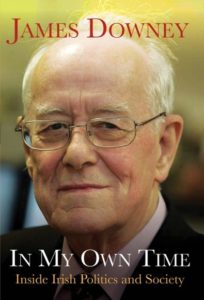 “In my own time, inside Irish politics and Society”

by the Irish political journalist, James Downey, who died in 2016.

Downey was from Dromahair, Co Leitrim, and the son of a teacher who was widowed when the author was only two years old. His account of his early life, and of the social and political conditions in Leitrim in the 1930’s and 1940’s is good.  His family were split politically and his mother’s people were anti Treaty, whereas the majority of Leitrim opinion supported the Free State.

But his father was apparently approached to stand for election by both Fine Gael and Fianna Fail, so divisions of allegiance may not have been all that stark. Mr Downey senior declined both opportunities.

Jim Downey attended Newbridge College, as a boarder,  and was good at writing English essays.

He always wanted to be a journalist and got his first job with the Carlow Nationalist. He subsequently worked for the Irish Press, the Irish Times and finally the Irish Independent.

He was politically active in Clann na Poblachta, supported Noel Browne in the 1950’s, and stood for the Labour Party in the 1969 election, as a running mate for Frank Cluskey in Dublin Central.

A great part of the book is taken up with the internal politics of the Irish Times, of which Downey had hopes of becoming editor at the time that that job went to Conor Brady in 1986. He gives vivid, but probably jaundiced, pen pictures of some of the personalities involved.

I found the part of the book dealing with the Arms Crisis of 1970 to be the most interesting. Downey is highly critical of Jack Lynch, who seems to have vacillated, and trusted nobody, on the Northern issue. He  ignored, or took no interest in, the dangerous activities of his Ministers, Neil Blaney and Charles J Haughey.

Haughey seems to have believed Blaney represented the authentic Fianna Fail vision and followed his line of the troubles in Northern Ireland on that basis.

Downey says the sacking of Miceal O Morain by Lynch, at the same time as Haughey and Blaney were sacked in 1970 , was completely unfair. It associated O Morain in the public mind with activities in which he had no part.

Downey’s own contradictions emerge in how he deals with the role he played, along with the  Irish Independent editor Vinny Doyle, in writing the front page editorial of the paper, just before the 1997 General Election. The editorial was entitled “Payback Time” and called for the ejection of the then government.

This front page editorial was a radical departure for the paper, and this departure was designed to  get attention and influence the election result. This might have been understandable if it arose from an analysis of the political and economic situation that had good grounds in fact. But this was not so.

The editorial promulgated the myth that the public had been “bled white” by the taxation policies of the outgoing government, in its short two and a half years in office. It excoriated the fiscally careful policies of the Rainbow Coalition and called for “payback”, in the form of tax cuts that it supposed would follow from by the election of Fianna Fail .

Although he wrote much of the editorial, Downey also claims that he also supported the fiscally conservative policies of the outgoing Finance Minister, Ruairi Quinn.  This is self contradictory.

To the extent that this editorial assisted the coming to office of Fianna Fail and the Progressive democrats in 1997, on a populist wave of anti tax sentiment, it contributed to the fiscal recklessness, and the inevitable crash, which followed .

It was remarkable that, in  Ireland at that time, that a major newspaper would have adopted such a populist fiscal policy, when the memory of the consequences of similar populism in the 1977 election was so fresh in their minds. It shows that errors can be repeated over and over, without lessons being learned, even by those supposedly following public affairs closely

The Irish Independent seems to have believed that , if Fianna Fail made tax cuts, they would then also make (unspecified) spending cuts to pay for them. In this, these supposedly hard boiled and realistic journalists showed an innocence that is really hard to credit.

It also shows that errors can be repeated over and over, without lessons being learned.

This episode is worth thinking about, as we face the possibility of another election in the next year or so.