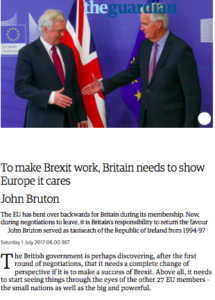 The EU has bent over backwards for Britain during its membership. Now, during negotiations to leave, it is Britain’s responsibility to return the favour

The British government is perhaps discovering, after the first round of negotiations, that it needs a complete change of perspective if it is to make a success of Brexit. Above all, it needs to start seeing things through the eyes of the other 27 EU members – the small nations as well as the big and powerful.

It also needs to manage the expectations of the British people so that every compromise – for example the Brexit secretary, David Davis, having to accept the timetable laid down by the EU chief negotiator, Michel Barnier – is not interpreted as a crushing defeat at the hands of enemies, but rather as an inevitable result of pulling out of an institution as legally and politically complex as the EU.

It is important for UK negotiators to remind themselves, every day, that Brexit is a British initiative. Because it is the initiator, the chief responsibility for making Brexit work for the 27 remaining EU countries rests with Britain. If Brexit damages the rest of Europe, Britain has a primary responsibility to find a way to mitigate that damage.

The remarkable thing about the discussion in the UK, over the past year, is that no ideas have been forthcoming on how to resolve the problems Brexit will cause for other EU countries. The only thought has been about what the UK should want for itself.

The EU is a rules-based institution, and EU membership is attractive for smaller countries, like Ireland, precisely because it is a rules- based institution, rather than one based on the exercise of raw power.
A country that has left the EU, and is no longer willing to submit to its common rules and to the jurisdiction of the court that interprets those rules, cannot expect to retain the main benefits of membership. That would undermine the EU’s essential nature.

Following the debate in the UK, one might think Brexit was something that was being done by the EU to an unwilling Britain, rather than the reverse.
It was Britain’s free decision to join the union 44 years ago, and since then the other members have done their best to accommodate British needs. It was exempted from aspects of EU policies such as the euro, the Schengen passport-free zone, justice and home affairs cooperation and, for a time, the social chapter of the EU treaties.

The UK’s budget contribution was modified through a rebate, and agricultural policy was modified.

And throughout, Britain remained a full voting member, with immense ability to stop policies it did not like. The UK was, you might say, having its cake and eating it.

Now that it is at last starting to negotiate to leave the EU, Britain may get a greater sense of what it is freely giving up. It will lose common arrangements on everything from flights taking off and landing, lorries on the roads, the safety of food, the movement of workers, and many more matters on which agreed standards have been built up over the past 44 years of painstaking work. It will lose the benefits of hundreds of treaties the EU has negotiated with other countries.

The UK will have to negotiate a new deal on every topic, then agree a procedure for subsequently amending, enforcing, and interpreting each one. This is what the Swiss, with their 120 different treaties with the EU, currently enjoy: a lot of very unproductive work. But it is the path the UK has chosen.

I told a London audience, long before the referendum, that as an Irishman I would regard a British decision to leave the EU – after four decades during which our two countries were bound together by our common EU membership – as an “unfriendly act” towards a neighbour. I have not changed my mind.

Notwithstanding that, I know Irish ministers and diplomats will use both their deep insight into British needs, and their highly developed understanding of EU deal-making, to find creative ways of reframing the difficult issues that will arise in this negotiation.

Ireland will be on the other side of the negotiating table from Britain, but I know too that it will aim to minimise the damage this divorce will inevitably cause. It will seek, for example, to use institutions, like the British-Irish intergovernmental council, as forums for creative thinking.
Even if it is not a member itself, a strong EU is important for Britain. Hard as it may seem, Britain needs to show that it is thinking about how that can be achieved, if it wants a reasonable Brexit outcome.