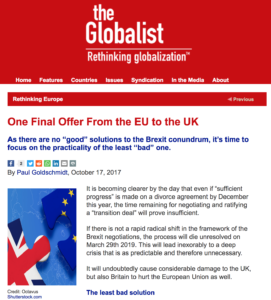 It is becoming clearer by the day that even if “sufficient progress” is made on a divorce agreement by December this year, the time remaining for negotiating and ratifying a “transition deal” will prove insufficient.
If there is not a rapid radical shift in the framework of the Brexit negotiations, the process will die unresolved on March 29th 2019. This will lead inexorably to a deep crisis that is as predictable and therefore unnecessary.
It will undoubtedly cause considerable damage to the UK, but also Britain to hurt the European Union as well.

The least bad solution
It is in this context that the ideas expressed recently in Brussels by the former Irish Prime Minister John Bruton deserve careful consideration. Recognizing that there are no “good” solutions to the Brexit conundrum, he focuses on the practicality of the least “bad” one.
His proposal is to trigger immediately the clause of Article 50 of the Treaty that allows prolonging the initial two year negotiating period (starting from the official notification on 29 March, 2017) by a further 4 years (until 29 March, 2023).
It requires the unanimous approval of the EU 27 (and of the UK) as well as a majority vote by the European Parliament.
There are of course serious drawbacks to the proposal but the advantages seem, nevertheless, far more compelling:

On the negative side:
• It will be difficult for the Brexiteers to swallow as it means a painful delay in – and a possible reversal of – the government’s commitment to implement the results of the referendum.
• It risks splitting the conservative party, leading to a political crisis and open the way for a Labor government. (This might happen anyway, but would become unmanageable if constrained by the current negotiating timetable).
• It postpones for four more years any possibility for the UK to negotiate trade deals with third countries.
• It will be difficult to accept by all the EU 27 because it prolongs the full “membership” of the UK with all its “privileges and obligations.”
• It might prove difficult for the European Parliament (and the 28 Members) to envisage the participation of the UK in the spring 2019 European Parliamentary elections (though there is no legal impediment if the UK remains a member).
• It might interfere significantly with other EU priorities, such as the need for carrying out comprehensive reforms, in particular if the UK is in a position to obstruct such initiatives.

On the positive side:
• It removes immediately the time pressure allowing a more serene atmosphere for continuing negotiations and a more realistic timeframe to conclude them.
• It allows the sequencing demanded by the 27, leaving sufficient time to negotiate and implement the EU-UK future relationship while hopefully removing the need for a “transition period.”
• It allows the UK the necessary time to recruit and train the additional staff it will require to assume tasks previously carried out by the EU, which appears extremely difficult to carry out under the presently defined timetable.
• Removing the need for a formal negotiated and ratified “transition agreement” will save a significant amount of time and effort. Indeed, even if the terms of a transition are agreed, it does not provide any assurances of a successful outcome concerning the future relationship, thus prolonging the uncertainty and encouraging actors to take “irreversible” decisions sooner.

Necessary amendments
If John Bruton’s proposals are to be considered seriously, they will nevertheless require certain amendments to the “status quo ante” that should be included in the Article. 50 prolongation procedure:
• The UK should be granted the formal option to withdraw “unilaterally” at any time during the negotiations, the Article. 50 notification in order to remain an EU Member after 29 March, 2023.
• In exchange the UK would agree, if it exercised its option, to forgo its budget rebate, join Schengen and abandon all of its other opt-outs (including from the Eurozone). Furthermore it would undertake not to trigger Article.50 for a minimum period (15-20 years).
Such demands will certainly be deemed “outrageous,” but an agreement along these lines presents considerable advantages for the UK: the government could offer its citizens (or Parliament) a new referendum with three clear options:
• Approval of the deal as negotiated with the EU.
• Withdrawal from the EU rejecting the proposed deal.
• Exercise of the UK’s option to withdraw the Article. 50 notification in full knowledge of the consequences (see above).

Weighing the options
The third option should be weighed carefully in the light of the problems associated with leaving the EU, the negative consequences of which have so far been muted but are expected to increase significantly as time goes by.
Within the reality of an interdependent multipolar world, it boils down to a choice between exercising a largely “virtual independent sovereignty” and sharing with the other Member States a truly “effective joint sovereignty” in promoting the highly correlated interests of Europe’s citizens on the world stage.
The proposed procedure would also allow the feelings of abuse that have been hurled by both Brexiteers and Remainers at each other, to heal.
It would provide a solid base for facing the future – whether in or out of the EU – with a reunited sense of belonging, overcoming the deep splits that have appeared between generations as well as between various parts of the United Kingdom.
A fully informed consultation of the population would restore the necessary balance between “democracy,” “the rule of law” and “human rights” which are each indissociably intertwined in the pursuit of “freedom” which, as was so well expressed recently by Commissioner Frans Timmermans in relation to the events in Catalonia, form the bedrock of the Union’s values.
An additional benefit of this approach is to put at the center of the discussions the interests of millions of citizens, be it those residing in each other’s territory (whose status will remain in jeopardy until a final agreement is reached) and those – both nationals and aliens – employed by companies whose business is affected by Brexit.

Putting the interests of citizens first
It should be the main purpose of any self-respecting government to put the interests of its citizens ahead of dogmatic or ideological party political prejudices or interests.
Rather than pinning one’s hope on the collapse of the EU as a weak ex post justification for Brexit, it is high time for those responsible for the future of the United Kingdom to think of serious “damage control” and consider calmly solutions, such as the one presented by John Bruton.
If it appears initially to be totally unacceptable, it provides, however, a sensible way of implementing the democratically expressed views of British citizens.