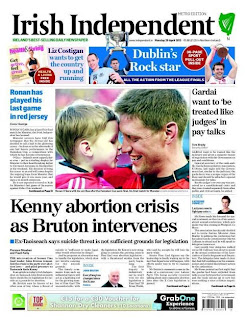 Introducing a law, that would say that a threat of suicide a ground for abortion, is not something that should be done under the pressure of artificial deadlines.

I know of no other area of law, where a threat of suicide is sufficient to make legal, what would otherwise be illegal.
The notion that a simple threat of suicide would make right, something that would otherwise be wrong, is a really dangerous principle.
We must think long and hard about where it might lead.
We should also think carefully about the legitimating effect, that giving a threat of suicide  this sort of  high level statutory recognition, might have on attempts to reduce the incidence of suicide, or of threats of suicide.
The abortion question boils down to whether one believes an unborn child is a separate human, with human rights of his/her own, or not.
Some believe the unborn child is not a human with human rights, but just a part of the mother. If it is a part of the mother and not another life, then of course logically, the mother could make her own decisions. But the Irish constitution says something different.  The Irish people formally rejected that view when they decided in 1983 on an amendment to the constitution, now Article 40,(3)(3), which says that the unborn child has an “equal right to life” with its mother. This is being forgotten in some recent discussions.
The word “equal” is crucial here. A possibility is never equal to a certainty. The particular sentence in the constitution  would have made sense if the word “equal “ had not been put before “right to life”, but it WAS put in. That must be respected in any law the Dail may pass.
In Article 40, the Irish constitution, in recognising his or her right to life, recognises the basic humanity of the unborn child, and grants the unborn child human and constitutional rights.
Thus I believe that an unborn little girls life cannot, constitutionally, be taken away by a decision of 2,4,6 8, or any number of doctors, along with her mother, because the Irish people have said that she has rights of its own, separate from all of them.
At the very least, the unborn child, whose life may be about to be ended, must have separate representation in any process that might suppress her life. That should be a fundamental and uncontroversial legal principle.
Allowing medical certificates of suicidal intent to suffice to authorise the taking away the otherwise healthy life of an unborn child, would also be put great stress on the system of medical ethics. Medical certification is sometimes fallible, as we know in regard to the certification of illness for absence from work.
The fact that leading psychiatrists are reluctant to be involved in certifying suicidal intent, in the context of ending the life of an unborn child, and the fact that many of them assert that abortion is never a cure for suicidal feelings, shows how impractical and mistaken was the original Supreme Court majority decision in the X case, in so far as it allowed suicide ideation on the part of a mother to override the equal right to life of an unborn child.
The only way out of the present dilemma is either
1.Address the medical decision making process relating to physical threats to the life of the mother, but  leave suicidal intent out as a ground for abortion, and let anyone, who wants to test the present constitutionality of this aspect of the X case ,  apply directly to the courts, or
2. an option I do not favour, have a constitutional amendment to remove the equal right to life of the unborn from the constitution.
Some may argue against these options on the ground that the X case is settled law, and is thus is a reliable basis for proceeding with legislation to allow abortion where suicide is threatened. I believe this is wrong.
Irish constitutional law has changed considerably since 1992, when X was decided. There are two particularly relevant examples.
The first is the development by the Irish Courts of what is called the “proportionality test”. This test, first adopted by the High Court in 1994 (2 years after the X case), but now well entrenched, is used by the Courts when deciding cases, where there is a clash of rights.
This test involves the Court in a much more searching examination of the evidence than happened  in the X case – when a majority of the Court agreed to the deliberate ending of an unborn life on the basis of a report by a single psychologist. Critically, the proportionality test requires someone, who is seeking to interfere with another individual’s rights, to prove that there is no other way of resolving the matter.
If a new X case were to come up, the Court would be required by the proportionality test, to take account of the sort of evidence, heard by the Oireachtas Committee recently, to the effect  that there are plenty of other things that could be done to prevent a suicide in such a case. As a result of the improvements in legal procedure and in psychiatric medicine, I believe Courts would decide an X case differently today.
The second way in which things have changed since the X case, is the amendment made by the people in 2001,which is now Article 15 (4) of the constitution, which bans the state imposing a  penalty of death, in any circumstances.
This ban cannot even be suspended in an emergency like a war. This added constitutional commitment to the inviolability of every human life, because it was passed after the X case was decided, could not have taken into account then.  In a future case, all the different articles in the constitution would be interpreted together, and the argument would surely be advanced that it would be incongruous, constitutionally, to allow an unborn and innocent child, with explicit rights to life under Article 40, to be deprived of her life, while protecting, in every situation, the life of an adult who had committed a very serious crime .
Print Entry

WHO ARE THE REAL WINNERS FROM COMPLEX FINANCIAL REGULATIONS?