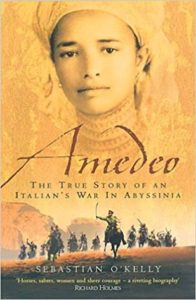 “Amedeo, the true story of an Italian’s war in Abyssinia”, by Sebastian O Kelly, should be made into a film.

It is the vivid and action filled life story of Amedeo Guillet, a member of the Italian nobility who was a show jumper, a soldier and a diplomat.  His family was  closely associated with the monarchy of the House of Savoy, under which Italy became a united country, and his loyalty was the that family rather than to Mussolini.

Amedeo fought in the Italian conquest of Ethiopia in 1936, in the Spanish Civil War in 1938, and in the Italian defence of its East African Empire (present day Somalia, Eritrea and Ethiopia)  against the British in 1941.

During the last of these wars he led the last successful cavalry charge in modern warfare.

When the Italian conventional forces were eventually defeated, Amedeo continued a guerrilla campaign against the British. He was able to recruit Eritreans, who feared , correctly, that British victory would place them under Ethiopian rule. In a sense the Italo/ British war of 1941 was a precursor to the long and bloody Eritrean war of Independence which lasted until quite recently.

When the tide of war turned and his guerrilla campaign was achieving little, he sought refuge in neutral Yemen on the other side of the Red Sea. There he became a trusted advisor of the Imam.

After the end of World War two, Amedeo Guillet entered the Italian diplomatic service and was, successively, Italian Ambassador to Yemen, to Morocco and to India.

He had a lifelong interest in horses and had been a founder of the successful Italian Show jumping team, which took part in the 1936 Olympics. When he retired, because of his love of horses, he came to live in Kentstown , County Meath. He hunted with the Tara Harriers and the Meath Hunt up to an advanced age.

Sebastian O Kelly befriended Amedo late in his life, and has written a fascinating life story.

TESTIMONY BY JOHN BRUTON,  AT THE SEANAD SPECIAL SELECT COMMITTEE ON THE UK’S WITHDRAWAL FROM THE EUROPEAN UNION