In “Indian Summer, Alex von Tunzelmann, the secret history of the end of an Empire” 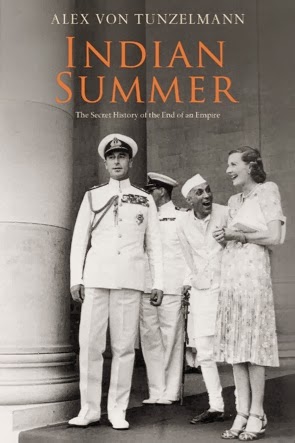 “Indian Summer, the secret history of the end of an Empire” by Alex von Tunzelmann (Pocket Books) is a parallel biography of three people, whose lives became intimately entwined…. Nehru,  Lord Mountbatten and Lady Mountbatten.
It is also an account of the messy, and ultimately tragic, process that transformed the patchwork of princely states and territories that was Britain’s Indian Empire, into an independent India, and an independent, but truncated, Pakistan.
The affair between Nehru and Lady Mountbatten was connived at by her husband, who saw political utility in it, and did not want to lose his wife completely. It undoubtedly led Lord Mountbatten, as India’s last British Viceroy, to take Nehru’s side against the Muslim League interest, in some of the difficult calls he had to make, as he oversaw a bankrupt Britain’s disengagement from an Indian Empire it no longer had the will, the money, or the moral authority to manage.
Britain had long used the divergences between Hindus, Muslims, Untouchables, Sikhs, and the princely states to prolong its own position in India. But when these conflicts developed a life of their own, Britain could no longer control them.
Churchill comes poorly out of this account. A long time opponent of Indian Independence, he contributed to the war time famine in Bengal, by restricting food shipments to India, and he later conspired in favour of Pakistan breaking away from India.
Gandhi  is portrayed as having overplayed his hand by emphasising the (Hindu) religious inspiration of his struggle, even though he was personally strongly and courageously opposed to sectarian politics.
Nehru was a more realistic politician than Gandhi, but his unreasonable stance in opposing a plebiscite that would have allowed Kashmir to join Pakistan, has created one of the most insoluble conflicts of the modern world.
Jinnah, the leader of the Muslim League of India and later founder of Pakistan, was originally in favour of Muslim/Hindu unity in an independent India, but his evolution towards partition was due to a number of factors, not least his bitter hatred of Nehru, and his distrust of the Mountbattens and their unduly intimate, semi clandestine, relationship with Nehru.
This is the first book by von Tunzelmann and she weaves the personal and romantic element into the political narrative in a very readable way.
Print Entry