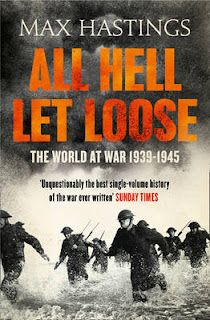 In the Second World War, the Soviet Union suffered 65% of all Allied military deaths, China 23%, Yugoslavia 3%,  and the US and Britain just 2% each.  The vast majority of German casualties were suffered on the Eastern Front against the Russians, and much fewer in France, Italy, the Balkans and North Africa.
I derive these startling statistics from “All Hell Let Loose, the World at War 1939 to 1945” by Max Hastings, which I finished reading recently.
The book’s focus is on the human impact of the war, using diaries members of the public kept, letters home from the front (some of them never posted but found on the bodies of dead soldiers), and other previously unpublished material. It also draws on the excellent autobiographical novel of Irene Nemirovsky, “Suite Francaise”, which deals with the impact of the war in a French village occupied by the Germans.
But Hastings is a military historian, and he weaves all this material together with a very good narrative of the politics and the warfare. He is unsparing in his judgements of the relative fighting qualities of the respective armies, and of their Generals.
Few British Generals, except Slim in Burma, get a good mark. McArthur’s attempt to retake the Phillipines is seen as an ego trip and unnecessary to the goal of defeating the Japanese.
The German forces were the best, right to the end.
Hastings  interprets Hitler’s, ultimately disastrous, decision to invade the Soviet Union as motivated by his belief that the Russians were rearming fast, and  by a desire to knock them out before they became strong enough to do the same to him.
The Russian’s achievement, after the Germans attacked, to quickly move their industrial capacity to Siberia, out of Hitler’s reach, was what eventually led to the fall of the Nazis.  And Stalin eventually learned to leave military decisions to his generals, whereas Hitler never did
This is a book of 675 pages, not to be summarized here, but it is well worth reading
Print Entry